James Rush, Tseshaht, served for the United States in the Gulf War from 1990–1991.There are at least 25 known Nuu-chah-nulth war veterans, including those that were enlisted with the U.S. Forces. (Submitted photos)

Veterans Affairs Canada is honouring aboriginal men and women in uniform for their contributions and sacrifices. Nov. 8 is National Aboriginal Veterans Day.

In Manitoba, Michel Doiron, Assistant Deputy Minister at Veterans Affairs Canada, joined students of the Aboriginal Community Campus at the Centre for Aboriginal Human Resource Development this morning for a commemorative ceremony to honor Canada’s fallen indigenous heroes and veterans.

Doiron laid a wreath at the commemorative ceremony on behalf of Veterans Affairs Canada.

According to Veteran’s Affairs Canada, this event brings together people of all ages, including veterans, youth and indigenous people to pay tribute to the many brave indigenous men and women in uniform—past and present—who have made great sacrifices to serve Canada and defend our values.

“Indigenous veterans have served Canada with pride and distinction, and their dedication continues today in military and humanitarian operations around the globe. The Government of Canada, along with the rest of the country, are immensely grateful for their contribution,” reads a Veteran’s Affairs Canada news release.

“Today, we remember as many as 12,000 courageous First Nations, Inuit and Métis people who served Canada in conflict and peace support missions throughout the 20th century, with more than 500 who made the ultimate sacrifice,” said Seamus O’Regan, Minister of Veterans Affairs and Associate Minister of National Defense. “We honor the contributions made by all Indigenous people while serving, such as Manitoba native Sgt. Tommy Prince—one of Canada’s most decorated soldiers who exhibited extraordinary bravery and dedication to this country.”

According to an online listing called Aboriginal Veterans Tribute Honour, there are at least 6,600 Aboriginal war veterans that served in the Canadian Forces in various wars over the past 100 years.

There are at least 25 known Nuu-chah-nulth war veterans including those that were enlisted with the U.S. Forces.

“I was a machine gun squad leader during Desert Storm,” Rush told Ha-Shilth-Sa. “The USMC gave me a chance to travel through Asia. I went to Okinawa, the Philippines, Bali, Surbaya and Jakarta. I was in the first combat ready unit in Saudi Arabia for Desert Shield and we were the first ones into Kuwait City in Desert Storm. I was honorably discharged in 1992.”

Upon his return home he was given a new name. “I got the name Subits-ulth, meaning Sand in the Face, after Desert Storm,” he shared.

Watch Ha-Shilth-Sa in the coming days as we pay tribute to Nuu-chah-nulth veteran’s on Remembrance Day. 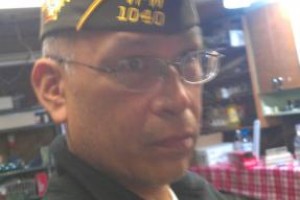 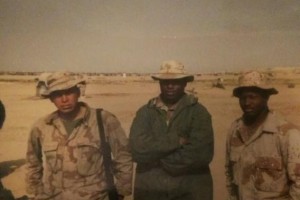