After publishing three science textbooks, a series of articles, opinion pieces for newspapers and scholarly journals, Karen Charleson has made the giant leap to published novelist.

On Monday, Nov. 13, Tofino Sea Kayaking is hosting a book release and signing for Charleson’s first novel, Through Different Eyes. Set in the fictional West Coast village of Kitsum, the story of 16-year-old Brenda Joe is told through the eyes of three local women.

Through marriage, Charleson is a member of the House of Kinquashtakumtlth and Hesquiaht First Nation. Since 2000, she and her husband Steve have owned and operated the Hooksum Outdoor School in Hesquiaht Harbour. With no phone service out of Hesquiaht Harbour, Ha-Shilth-Sa “spoke” with Charleson via email.

“Through Different Eyes is a work of fiction. It is made up,” Charleson wrote. “That said, however, it takes place on the actual West Coast of Vancouver Island. While the villages of Kitsum and Port Hope are fictional, I have tried to make them “real” West Coast villages.

“Similarly, the characters in Through Different Eyes are fictional. None of the fictional characters are based upon real people. However, I have tried very hard to make my characters true to life. I want readers to be able to relate and recognize the characters as true West Coast people.”

Through Different Eyes follows the plight of Brenda Joe when she begins to realize she is pregnant. Morning sickness, fatigue, mood changes. Her friends fall away. Her secret boyfriend, Michael, makes himself scarce. Brenda will have to count on her family, which includes university-educated Aunt Monica, to come through this crisis.

Charleson was asked if she was trying to address any specific social issues through her story.

“I was thinking of two very concrete things as I wrote the novel,” she wrote. “One, I wanted to tell a positive story about ‘ordinary’ daily life as it is lived by the people who have known this area as home for countless generations here on the West Coast.

“The other was to show the enduring strength and central importance of family. I do not specifically name Nuu-chah-nulth or any First Nation (other than the fictional Kitsum First Nation) in the novel, but I think that anyone who reads it will easily be able to recognize Nuu-chah-nulth attitudes, perspectives, and ways of doing things in the community and family.”

Charleson said she first turned her hand at novel-writing about a dozen years ago.

“I wrote perhaps a hundred pages and my story ran out of steam. It sat in a drawer in Hot Springs Cove for a few years, while my husband and I began to live at Ayyi’saqh in Hesquiaht Harbour year round.”

But, walking down the beach one day, Charleson’s mind turned back to that “part of a novel sitting in a drawer.” While the broad plot outline worked, the budding novelist realized the problem was technical: point-of-view.

“The person I was using to narrate the story could not possibly know of all the events and feelings, etc, around what was described,” she realized. “Different people knew different things about this story. I needed to find a way to include their voices.”

Charleson made the decision to use three different narrators, and she began the process of writing, editing and re-writing.

“From that walk on the beach to the draft I initially submitted to publishers was about three years.”

For any first-time author, the submission process is long and frustrating. Most publishers demand to be the sole recipients, and they can take months to make a decision. After three or four such submissions, Charleson decided to take her chances and make multiple submissions.

“Karen Haughian at Signature Editions was the first publisher to approach me with a thoughtful analysis of what I had written in Through Different Eyes, and with her ideas about how I could make it a better novel,” Charleson wrote.

While Signature Editions had accepted the book, it would be another two years, a complete re-write and six months working with an editor, poet Garry Thomas Morse, before the manuscript was ready for press.

“Garry and I were able to go over every word of Through Different Eyes. I learned a lot!”

The book launch takes place from 3 to 4 p.m. at Tofino Sea Kayaking, 320 Main St., Tofino. Charleson said Signature Editions is now distributing Through Different Eyes to stores and markets, and she has begun promoting it through social media.

Through Different Eyes is available at local bookstores (in Tofino, books are available from Tofino Sea Kayaking, Tree House Gift Company and Mermaid Tales Bookstore) or can be ordered from Amazon.ca or Chapters/Indigo.  For a short description and excerpt, log onto the Signature Editions website at: www.signature-editions.com. 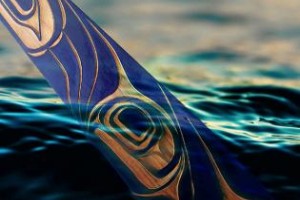