Tla-o-qui-aht elder Barney Williams was granted an honorary doctor of laws degree by the University of Victoria on Tuesday, Nov. 14. (Denise Titian photos)

Tla-o-qui-aht elder Barney Williams Jr. has become the latest Nuu-chah-nulth-aht to receive an honorary doctorate degree from the University of Victoria.

The University of Victoria awards several honorary degrees each year. By doing so, they recognize extraordinary achievement in community, national or international service. Their nomination criteria notes that they endeavor to honour individuals whose accomplishments are of such excellence that they provide, through example, inspiration and leadership to the graduates of the university.

Williams, a respected Tla-o-qui-aht elder, is a residential school survivor who has gone on to make great contributions to his people and the public at large through his work. A registered clinical counsellor, Williams has worked with the Truth and Reconciliation Commission of Canada and serves as an elder at UVic, helping guide the university’s role in reconciliation. He also serves as an elder advisor at Tsow-tun Le Lum Society Treatment Centre.

The 2017 fall convocation ceremonies at UVic marked the successful completion of academic studies for more than 1,396 graduates. Some joined Williams in the commencement ceremony.

Following the university’s territorial acknowledgment to the Songhees and Esquimalt First Nations, Dr. Skip Dick, Songhees elder, welcomed the people and congratulated the class of 2017.

Ian Case, Director of Farquhar Auditorium at the University, briefly introduced Williams and outlined his contributions to society before asking Chancellor Shelagh Rogers to award an honorary doctor of laws degree to the elder.

In his acceptance speech Williams thanked those that bestowed this honour upon him. “I am overwhelmed with emotion, humility, humbleness and gratitude,” he said.

He talked about the years he spent in that dark place called the Indian residential school, and the damage it did to him and to others. “But I am here today,” said Williams.

He credited his grandmother, whom he called his champion, for giving him the love, support and teachings he would need to get on with a productive life. “She was my greatest teacher,” said Williams.

Williams talked about the reconciliation work he does with the university as an elder. As he congratulated the UVic class of 2017 he talked about how their hard work will reward them with a journey. “You will help us go forward, hand-in-hand, together on this journey of reconciliation,” he told them.

Before closing, Williams thanked his friends and family, his children and grandchildren, and finally, his beautiful wife Trina. 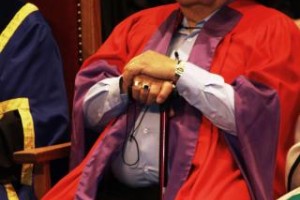 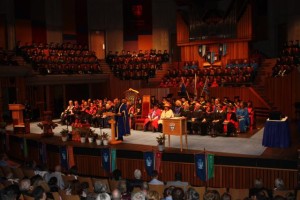