Delilah Titian smiles for the camera in Ahousaht. Like other Nuu-chah-nulth nations, Ahousaht is experiencing a continued growth in registered members. (Denise Titian photos)

Two decades ago when Greg Louie was running Ahousaht’s Maaqtusiis school, it became clear the existing building could no longer house the growing number of the First Nation’s youth.

“I realized in my second year as principal that the school was busting at the seams,” said Louie, who is now Ahousaht Chief Councillor. “There were about 235 kids in that one building.”

The First Nation began lobbying the federal government to support the construction of a new school. Thirteen years later the Maaqtusiis Secondary School was completed in 2011, a $12-million facility next to the existing Maaqtusiis Elementary.

With approximately 130 current students, the elementary building has more room than when it housed all grades in the past. But the school has recently seen more incoming youngsters, and this year it had to add a second class for kindergarten students.

“Over the last five or six years there seems to be a surge,” said Louie of the First Nation’s recent increase in births. “One year I was told there were 40 babies born in our community.”

The trend is similar for indigenous peoples across Canada, who grew four times faster over the last decade than the rest of the country, according to numbers released by Statistics Canada on Oct. 25. From 2006 to 2016 people in Canada who identify as aboriginal increased by 42.5 per cent to nearly 1.7 million, with nearly one third being Metis.

It’s a gradual change in Canada’s demographic composition that has forced school districts to adapt. This is evident in the Alberni District Secondary School, which sits on the traditional territory of the Tseshaht and Hupacasath First Nations. On either side of the high school’s front door entrance signs read N~ac^aaty`akuwi> (Library) and ?uksy`aqstiquwi> (Administration). Since the sign initiative began in 2016 Nuu-chah-nulth language has become visible throughout the high school.

“It was in direct recognition that as a school district we wanted to be welcoming, inclusive and reflect the communities in which we have schools,” said Dave Maher, SD70’s district superintendent who manages aboriginal education, a position that was introduced in 2017. “We’re doing things differently because if we continued to do things the same in regards to language, we wouldn’t be a good educational partner.”

This year one third – or 32.8 per cent - of the Alberni School District is indigenous, with the majority being of Nuu-chah-nulth descent. Historically indigenous learners within SD70 have seen poorer academic results than the rest of the student body; in 2016 the school district’s aboriginal students had a 49 per cent high-school completion rate within six years, while the Alberni district’s overall average was 75 per cent, according to the B.C. Ministry of Education. The trend has been similar across the province, and this disparity has brought direction from the ministry for school districts to better meet the learning needs of the growing number of indigenous students.

Although SD70 has had a First Nations presence in its curriculum for decades, what were once intermittent Nuu-chah-nulth educational showcases or aboriginal-focused events has become an integrated part of day-to-day studies, said Maher. Under the management of the Nuu-chah-nulth Tribal Council, a dozen Nuu-chah-nulth education workers now have a presence in each of the district’s schools. A Huu-ay-aht education worker is also present in the Bamfield Community School, which is within the First Nation’s traditional territory.

“We need to develop things in very close consultation with our local communities,” said Maher.

Schools on Vancouver Island’s northwest coast have also found a deep need to consult with the Nuu-chah-nulth communities they serve. Half of SD84’s population of 400 students are indigenous, leading educators to create a culturally comfortable environment based on Nuu-chah-nulth traditions.

Tarasoff has heard a desire for students to see their First Nations culture in the schools, where supportive and caring adults lead them through learning.

“We aren’t aboriginal institutions, we aren’t community members, we aren’t elders - we don’t have that knowledge and that ability, so we have to be open to that,” he said. “Once you have the students comfortable seeing their language and culture reflected in the school, the academics are something that’s achievable. I think that information comes to us from the communities over and over again; you can’t start with academics, you’ve got to start with where the kids are at and where the communities are at and then the academics come.”

“In the majority of our schools, that is the second language that’s taught there,” said Tarasoff.

Nuu-chah-nulth has become a larger part of the curriculum in the Alberni School District’s high schools as well, and this year SD70 hired a linguist to oversee the teaching of the language. Nuu-chah-nulth studies are now available to Grade 8 students at Ucluelet Secondary, and can be taken from Grade 8-10 at Alberni District Secondary. Students are taught language for 10-15 per cent of classroom time, with cultural teachings, history and contemporary issues comprising the rest of the course. Over the last school year an additional two classes had to be added due to demand in Alberni District Secindary.

Maher recalls that ADSS had to adapt when the school district was reconfigured in 2015, which made the high school the next step for students who came from Haahuupayak on the Tseshaht reserve.

“Their language studies were all in Nuu-chah-nulth,” he said. “For the first couple of years we did our very, very best and the majority of feedback indicated that we needed to do quite a bit more in regards to the language development. We’re really trying to develop a true partnership with communities, saying we need help, because the language is not ours.”

Although the number of fluent speakers has declined over the last few generations, the Ahousaht dialect of Nuu-chah-nulth remains a vital part of the community’s connection to it hahoulthee. Louie has noticed pronunciation change over his lifetime.

Teaching the Ahousaht dialect is an integral part of the curriculum at Maaqtusiis, yet it’s now a younger generation teaching students the ancestral language.

“Right now at the school they don’t have the elder in the school leaching the language anymore like they used to,” said Louie. “They have these young leaders in our school who are becoming fluent in our language, they articulate our language quite well.”

During the Ahousaht Annual General Meeting on Nov. 1 a Maaqtusiis teacher brought up the possibility of introducing immersion to the schools, a development that could allow the community to educate its youth to become fluent speakers in the language of their homeland. 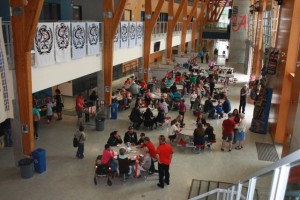