Holding a message for his son in Vancouver, Rueben Thomas stands outside the new Teechuktl Mental Health offices on Third Avenue. Nov. 16 marked the offical opening for the new location, when the ceremonial ribbon was cut by Thomas and Rita Marlene Watts (following photo). During the event clients shared their stories of recovery, including Cliff Lucas Sr. (Eric Plummer photos)

On a rainy afternoon in mid-November Rueben Thomas stands outside the offices of Teechuktl Mental Health on Port Alberni’s Third Avenue, holding a sign he’s just made for the camera.

“Love you son, Reno Montz,” reads the note to the nine-year-old boy who lives in Vancouver with his mother. “Miss you big time.”

The gesture is one of the many displays of affection that easily come from Thomas towards his distant son. As a recovering alcoholic, his love for the boy provides constant motivation to maintain sobriety.

“That’s my goal: I’ve been sober for eight years and I’m reaching out,” said Thomas, who hopes to spend time with Reno over Christmas. “I love him and I want to show him that I love him.”

Behind Thomas stands the new Teechuktl offices, moved by the Nuu-chah-nulth Tribal Council from the former Argyle Street location in the summer. Thomas visits the location daily, and just took part in the offices’ ribbon cutting to mark the official opening on Nov. 16.

“They’re my support group,” said Thomas, who regularly attends Teechuktl’s weekly men’s group counselling session. “I’ve been to six treatment centres just to get this far in my life.”

Located in Port Alberni’s uptown district, the new Teechuktl office is right in the middle of where it needs to be to support urban clients, said the department’s southern region coordinator Ruby Ambrose. Staff offer a variety of wellness services from a Nuu-chah-nulth perspective, but the location is open to anybody in need, she said. Services include cultural support through the Quu’asa program.

“A lot of them, they come here when they’re really struggling, and ceremony gives them an opportunity to let go, and it also uplifts their spirit,” said Ambrose, adding that staff provide brushings and other cultural supports in a designated room at the Teechuktl location or, if possible, outdoors. “Early in the morning they will bring somebody to the river or out to the mountain to do ceremony.”

These ceremonial practices remind Thomas of the positive influences from his upbringing in Ahousaht.

For Thomas, overcoming alcohol abuse entailed relocating to Port Alberni for a fresh start seven years ago. He’s had to change the company he keeps to maintain sobriety.

“I did what the other guys did,” recalled Thomas, who now swims and exercises to maintain his health. “Age goes fast. I have six uncles who are alcoholics, they stay in one house.”

The lure of certain old friends and family are what Rita Marlene Watts calls “triggers” that can bring relapse into addiction. In recovery for four years, Watts doesn’t have to look far to see the trappings of her former life. There were times that the availability of drugs and alcohol prompted Watts to ask staff for a ride home after visiting Teechuktl’s former office on Argyle Street.

“In my sobriety, I have changed my friends,” she added. “I don’t carry drug addicts’ phone numbers.”

Watts attends Teechuktl’s women’s group session every Tuesday from 10 a.m. to noon to share her story and hear from others. Recovering from her addictions has taught Watts how to sit and listen, she said.

Over the last four years several rounds of treatment at different centres has helped Watts come to terms with abuse she suffered in the past.

“I’ve learned to let it go,” she said. “If you hold onto it you’re always going to walk hard, but, you’ve got to learn to let it go so that you can start walking lightly and carry on with your life.”

A big part of Watts’ life now is caring for two of her grandchildren, plus two others.

“I’m now a foster parent, I’ve got four children in my home,” she said. “I’ve taken all of that hard life, I’ve flipped it and threw it away, and turned myself into a positive woman.” 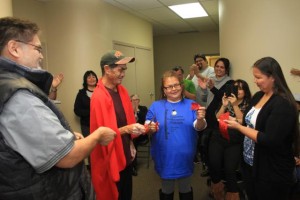 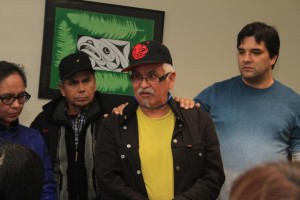