The province and local governments within the Alberni-Clayoquot Regional District have joined forces to launch the BC Poverty Reduction Strategy, which involves a series of community consultations across the province, including an event in Port Alberni on Jan. 23.

In what amounted to a preview event, most of the principal players gathered at the Port Alberni Friendship Centre on Friday evening, to celebrate the signing of the Alberni-Clayoquot Poverty Reduction Protocol Agreement. The dinner was sponsored by the Alberni Clayoquot Health Network and served up by Friendship Centre staff.

Tseshaht Chief Elected Councillor Cynthia Dick and Sharean Van Volsen of Hupacasath First Nation welcomed guests into the two respective traditional territories. Dick, who delivered her opening remarks in Nuu-chah-nulth, said she is just getting up to speed on the poverty reduction initiative.

“Poverty is a critical issue for Nuu-chah-nulth, so we plan to play a major role in this initiative,” she said.

B.C. Minister for Indigenous Relations and Reconciliation Scott Fraser said his ministry is not formally connected to the BC Poverty Reduction Strategy, “However, everything we deal with in the Alberni regional and in Mid-Island/Pacific Rim [riding] is inextricably linked with Nuu-chah-nulth.”

Fraser said he and his NDP colleagues launched the poverty reduction initiative one year ago, while still in Opposition. At the time, he said, B.C. was the only province in Canada that did not have a poverty reduction strategy, despite having the highest child poverty rate in the country.

“We recognized we had to address all the issues around poverty – homelessness, health outcomes – and that we had to deal with it as a region, and at all levels of government, including First Nations.”

At that point, they enlisted Courtenay-Alberni Member of Parliament Gord Johns, to engage Ottawa in the initiative, Fraser said. Johns attended the Friday event.

Fraser said many people are simply unaware of how poverty affects their communities. For that reason, Fraser said, one good strategy is to invite people from the community – including poor people ­– to gather in one place to meet face-to-face and share a meal.

“We’re feeding people. We don’t want just a bunch of talking heads. We want people who are experiencing poverty, and everything that is related to it,” he said.

Fraser said offering a substantial meal is one incentive for people to show up. The poster for the Jan. 23 event specifies that a “hot meal” will be provided.

“They can come in, get a hot meal, and, perhaps, they will consider participating,” he said.

Later, in his speech, Fraser emphasized the impact of poverty in the region.

Fraser said his government is committed to improving housing and making education, skills training and childcare more affordable, and to raising the minimum wage (currently $10.45 per hour) to $15. One goal is to live up to the UN Declaration of the Rights of Indigenous Peoples, he noted, emphasizing one tenet: “Freedom from Poverty.”

As a side note, Fraser pointed out that Huu-ay-aht First Nation was the first government in Canada to adopt a living wage policy (currently $20.11 per hour). Ucluelet First Nation followed suit shortly afterwards.

In his speech, MP Johns said the Alberni Valley has reached a crisis point.

“Here, we have one of the highest poverty rates in the province,” he said. “We’ve had enough studies.”

Johns said initiatives like a living wage, improved childcare and a universal prescription drug program have proven successful in countries around the world in combating poverty. In Canada, increased investment in education for indigenous children is another obvious strategy. But a lack of affordable housing remains one of the most critical issues.

“It’s not just in the Alberni Valley. It’s right across the riding and Vancouver Island,” he said. “We’re at the tipping point of what happened in the Lower Mainland. We’re not talking about it enough in Victoria and Ottawa. And we’re not prepared for it.”

“Housing is a right – a human right. This region has been starving for so long. And it’s time to get our share.”

Johns acknowledged it would take community effort and political will.

“But we need your help. Scott and I will be noisy,” he added.

“We are more likely to see diseases, injuries – all sorts of challenges in populations that have lower economic incomes,” he explained. “That can range from heart disease, chronic lung problems…many of our injuries are more common for people who are in impoverished conditions. Substance use, dependency disorders, mental health disorders… there is a broad, broad range. And it’s not that those illnesses have led to the poverty. It’s that the poverty exacerbates the underlying illnesses.”

Hasselback said the link between poverty and poor health outcomes is a matter of record. The question is how to deal with it, he said.

“That’s what is so exciting to be here this evening: an honest attempt to do something.”

Improving income and living standards for low-income people can directly improve their health. But handing out money is not the solution, Hasselback said. Improving access to employment, providing support services (again, childcare support is an obvious choice) and establishing a living wage would help break a cycle of poverty that society has imposed.

“If we lift people out of impoverishment, we are going to get better outcomes,” he said. “We know that. We just have to do it.”

Port Alberni Mayor Mike Ruttan said the city has taken a number of initiatives to fight poverty, such as reducing the cost of construction for housing by providing property tax breaks for certain non-profit societies and by providing services through the Parks and Recreation department.

“We also support the breakfast program in the schools,” he said.

“More important, though, is to determine how to make the residents of this city feel they can contribute – how can they participate in creating solutions to our problems?” Ruttan said, adding, “Of the 26 regional districts in our province, we are in the bottom ‘one’ or ‘two’ of every one of the socioeconomic indicators, whether we’re talking ‘Health’ or ‘Teen Health’ or ‘Seniors Health,’ we have challenges.”

Ruttan said goal is to focus on key issues such as education, food security, jobs and the economy. But the effort has to take place at all levels, he added.

“No one level of government is going to do this on its own,” he said. “We can’t buy our way out of this.”

Following dinner and dessert, guests were invited to take part in a panel discussion, prior to the signing of the Poverty Reduction Protocol. That was followed by further discussions and an opportunity to network.

The Jan. 23 community consultation event takes place from 5 to 8 pm at the Alberni Athletic Hall, 3727 Rogers Street. The event is coordinated by the Alberni Valley Employment Centre on behalf of the Ministry of Social Development & Poverty Reduction.

“We were contacted by our Ministry about a week ago – this is pretty short notice,” AVEC Community Partnership Coordinator Bill Brown said. “We are a Work BC Centre, so our contract is with the provincial government to provide employment services, under contract with that Ministry.”

Brown said AVEC’s role is mainly to “spread the word” to the community. That included contacting Ha-shilth-sa, to invite as many Nuu-chah-nulth members as possible, he noted.

According to a factsheet from the BC Poverty Reduction Coalition, B.C. has the highest poverty rate in Canada at 11.5 per cent. That equals more than half a million British Columbians struggling to get by. B.C.’s child poverty rate, at 10.5 per cent, is the second highest in Canada.

According to the Coalition, poverty costs the province approximately $8-9 billion in health care, criminal-justice, and foregone tax revenue, while a poverty reduction plan would cost about half that at $4-5 billion. 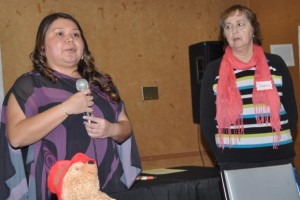 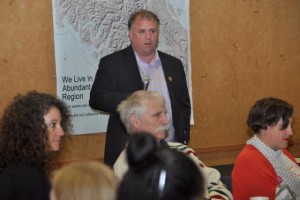 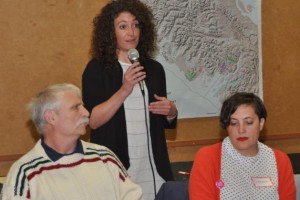