From left to right: Dr. Sam Williams (Chief of Staff) and Alexandra Reynolds (Clinical Coordinator for Med/Surg) are presented with a ceremonial paddle and Certificate of Excellence from Dorothy and Agnes Keitlah. At right is Shauna Prouten (Dietician) at the West Coast General Hospital on March 29. (Shayne Morrow photos)

The extended Keitlah family has given thanks to staff at West Coast General Hospital, for their outstanding efforts that saved the lives of two young mothers.

Family members gathered at the hospital on March 29, bearing gifts and sincere thanks. WCGH Chief of Staff, Dr. Sam Williams, led a delegation of staff members to share the occasion.

The event was arranged by Agnes Keitlah, whose daughter, Christina Williams, experienced a sequence of medical crises in December.

“Christine is 31 now. She had dislocated her shoulder when she was 16,” Agnes explained, adding that the injury was quite severe and required frequent follow-up treatment over the years. “She underwent surgery on her shoulder, and was taking a lot of medication. At the same time, she got a kidney infection.”

As it was explained later to Agnes, Christine’s kidneys were unable to process the medication she was taking, which, in turn, caused severe damage to her pancreas.

“It was really intense,” Agnes explained, adding that the pancreatitis in turn caused severe seizures and delirium. “We waited 25 minutes for the ambulance. This was in Ucluelet.”

Christine was transported to WCGH, where she was attended by a series of physicians.

“We thought we were going to lose her. It was touch and go, but they stayed ahead of it,” Agnes said. “They managed to bring in a specialist to see her.”

“I was really amazed and so was her dad (Ted Williams), at the lengths the hospital went to save my daughter,” said Agnes. “We are really thankful to the staff for all they have done for my girl, and that she is still with us.”

Christina, who has one child, was not on hand to take part in the informal ceremony. She was released two weeks ago.

The second survivor, Dorothy Keitlah, who is Agnes Keitlah’s niece, was able to thank staff personally. She has two children.

“This is the first time [WCGH] has dealt with this kind of condition,” she said. “At one point they felt she had, at most, two weeks to live. She was very, very sick. Within five days, WCGH shipped her to Royal Jubilee [Victoria] for a few days, and then she was sent back here. She has been here since.

“The hospital wasn’t expecting her back – she wasn’t expected to live through the weekend, but the treatment she received in Victoria picked her up enough to stay here at WCGH,” she added. “For everything being a ‘first-time’ for this hospital with this condition, they did an amazing job. Her will to come back was stronger. And for that, we are thankful.”

Agnes gave special thanks to Dr. Williams for leading such a dedicated team. As she summed it up:

“They are still with us. That is what this presentation is about. We are so thankful we have these two beautiful young ladies with us.”

Dorothy said she was scheduled to move to Victoria on the weekend, and receive treatment as required.

The first presentation was made by the patient’s uncle, Wally Samuel.

“Our family appreciates how our hospital takes care of Dorothy,” Samuel said.

“We realize all the hard work you do to heal our people,” he concluded. “We say Kleco Kleco.”

Dr. Williams and her team were presented with a Certificate of Excellence and a ceremonial paddle.

Agnes further presented Quu’asa support worker Maureen Knighton with a gift of appreciation, for her continuing support for the Keitlah family.

“The words, Dorothy, from your uncle, are extremely important to us,” she said “We love Dorothy here. You’re such a strong young lady, and whatever you need now, and into the future, we will always be here for you.”

As it turned out, the Keitlah family had a third thank-you gift to deliver, this time from Nelson Keitlah Jr., on behalf of his late grandfather, Nelson Keitlah Sr. As he recalled, the month before his grandfather passed away, he began experiencing fainting spells.

“It came out of the blue. We had been out for coffee, we had been to church, and we were going to dance practice,” Nelson Jr. said. “When we were leaving the market, he collapsed.”

The elder did not realize the seriousness of his condition, and after taking him home, Nelson Jr. called the paramedics.

The care professionals were surprised, and a little embarrassed, when the patient tried to give them a gift of $50 cash.

“They declined it, but what my grandfather was doing, was giving thanks to them for helping him in a time of need. That’s what we do,” Nelson Jr. said.

“We want to thank you for taking care of my cousins,” he said. “Hospitals don’t get us when we’re at our best, but you guys have been great.” 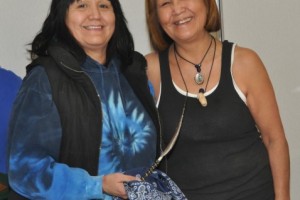 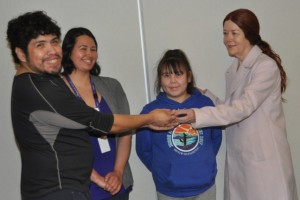