Negotiators for five Nuu-chah-nulth nations are claiming a legal victory after the B.C. Supreme Court announced details from a round of litigation on their fishing rights.

Today the court determined that the federal government has infringed on the fishing rights of the Ahousaht, Ehattesaht/Chinekintaht, Hesquiaht, Tla-o-qui-aht and Mowachaht/Muchalaht First Nations. These nations operate the T’aaq-wiihak fisheries, which translates as fishing with permission of the Ha’wiih (hereditary chiefs).

Today’s ruling essentially upholds a decision from the B.C. Supreme Court in 2009, which recognized the nations’ right to catch and sell fish from their territories. Amid legal challenges from Canada, these rights were reaffirmed by the B.C. Court of Appeal as well as the Supreme Court of Canada in 2014.

The five nations have made their own fishing plans to provide for their community’s needs. Cliff Atleo, Ahousaht’s lead negotiator, said this most recent ruling comes closer to the details of these fishing plans, notably by providing clarification on how the sports fishery could infringe on Nuu-chah-nulth territories.

“The judgement has said, ‘No, you’ve got to get these guys out of the water.’ You can’t justify infringing,” he said, although Atleo noted that more is required to define the issue. “There’s work to be done with regard to review of that policy.”

But a concern that the nations have with today’s ruling is that it characterizes the right to fish as one that is exercised with smaller boats more than larger vessels.

“It’s a little troubling with regards to comments on small-scale fishery,” said Atleo.

Today’s ruling results from what has become known as the “justification trial,” a second round of litigation that followed the 2009 B.C. Supreme Court Judgement. Over 155 days in court that began March 9, 2015, Canada used 108 days to present its case with 25 witnesses. The Nuu-chah-nulth nations presented their case over 32 days in court, with 11 witnesses.

The nations involved in the T’aaq-wiihak fisheries are prepared to follow through with elements of their fishing plans, which would mean increases to the past allotment limits set by Fisheries and Oceans Canada.

“We call on Canada to settle this matter within the true meaning of reconciliation to reach a nation-to-nation agreement that is good for our communities and good for Canada too,” said Tla-o-qui-aht Chief Councillor Elmer Frank. “It is far past time for Canada to work with our five nations to settle these matters as we have been proposing since 2009. It is time for us to go fishing, as we have laid out in our fishing plans since 2014 and as we will start doing this summer.”

On the same day that the B.C. Supreme Court ruling was announced, Dominic Leblanc, Canada’s Minister of Fisheries and Oceans, committed to continue to work with the five nations.

“I personally met with the leaders of the Ahousaht, Ehattesaht, Hesquiaht, Mowachaht/Muchalaht and Tla-o-qui-aht and I was pleased to offer additional licences and quota for ground fish, salmon, and shellfish to the five Nations,” he said in a statement released by the federal ministry. “We will continue to advance the relationship between the Government of Canada and the Five Nations: we are already working hard on a new reconciliation process to implement their fishing rights.”

“As an immediate step, I have directed Fisheries and Oceans Canada to review the Pacific Salmon Allocation Policy,” added Leblanc. “We will work in collaboration with Indigenous groups and all stakeholders to renew and co-develop this policy.

Atleo noted that within a year there are five or six items that DFO has to work on to help uphold the nations’ rights.

“I’m very hopeful that we can start benefitting from not only the chinook and coho, but in those others fisheries - particularly the halibut and prawn fishery, crab, gooseneck barnacles,” he said.

The next generation depends on the implementation of the nations’ fishing rights, including Atleo’s five-year-old grandson.

“We want to ensure a solid foundation,” he said. “My grandson wants to be a fisherman, he should have that opportunity.” 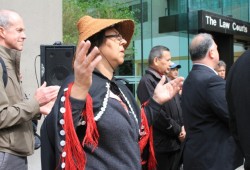 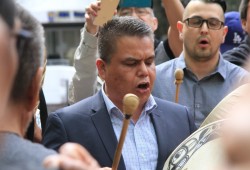 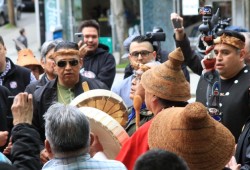