The central region Nuu-chah-nulth tribes can expect to see a variety of cultural and environmental benefits from the Clayoquot Biosphere Trust’s new Vital Grant program.

These include cleaner beaches as well as increased ecological, cultural and language learning opportunities for students and families - plus more financial support for a healing movement carried by local men. Nuu-chah-nulth cultural and language documentation and archiving also received support.

Clayoquot Biopshere Trust (CBT) announced the successful recipients of their first ever Vital Grants at an April 20 gathering at the Darwin Café in Tofino. Four grants of $20,000 each were awarded. The four projects are Carving on the Edge Society’s “Putting the culture in the hands of our children,” Raincoast Field School at Ucluelet Elementary, Surfrider Foundation’s 2018 Remote Clean Up Series & Ahousaht Beach Clean Team and the Westcoast Community Resources Society & Strengthening a Strong Foundation Kliilth Pi-taap Taaqumths Men’s Group.

“Our goal is to achieve all aspects of sustainability: cultural, social, economic and environmental in order to meet the mandate of the UNESCO Biosphere Designation,” said Rebecca Hurwitz, CBT Executive Director. “The United Nations launched 17 sustainable development goals with the ambitious aim to solve some of the world’s most critical sustainability issues by 2030.”

The Vital Grants program was developed in response to feedback from local organizations, volunteers and other funders. Hurwitz said the CBT received appreciation for its flexibility and the work its doing in the communities.

“One comment really stood out and that is one grantee simply stated that, ‘small grants make it difficult to address big issues’,” said Hurwitz. “With this in mind, for 2018 we created the new Vital Grants program, a stream of partnership funding to address regional priorities and complex challenges.”

The Carving on the Edge Festival Society’s project, “Putting the culture in the hands of our children,” partners with other cultural educators. It includes the creation of a mural with Tla-o-qui-aht youth, as well as some archival and language presentations and documentation in connection with the Carving Festival. Helene Descoteaux explained the group’s goal is “to put together a few different projects all based around intergenerational learning.”

Raincoast Education Society’s (RES) project, the Raincoast Field School at Ucluelet Elementary School, is an exciting and welcome addition to the school, according to Principal Jamie Hansen.

“For the last four years we’ve had a program in place at the Tofino Elementary School where every student gets to go out and do field trips as part of their day-to-day class life,” explained RES Executive Director Mark Maftei. “Instead of learning about science from a textbook inside, they go out to the beach to learn about it.”

Maftei credits Ariane Batic, RES Field School Coordinator, with much of the success of expanding the field to school to Ucluelet Elementary.

Strengthening a Strong Foundation Kliilth Pi-taap Taaqumths Men’s Group is a project arising from a partnership between the Westcoast Community Resources Society and the men’s group. The men’s group seeks to expand on cultural activities for men to promote well-being and build resilience.

“Kliith Pi-taap Taaqumths is the act of stomping on the ground before building a house. It signifies creating a firm foundation,” states a CBT backgrounder. “The men’s group was established by men for men to come together and support one another.”

Margaret Morrison of the WCRS explained the partnership arises from shared values for health and healing.

“Partnering with WCRS and CBT none of this would have happened if it wasn’t for teamwork,” he added. “Part of being a leader is actually allowing each other to take the lead of something.”

“Sadly it’s often the men in the community that cause a lot of the dysfunction,” reflected Dwayne Martin of the Men’s Group, “a lot of the abuse, a lot of the alcohol - so we’re trying to change that in a healthy way, just stand together as healthy men.”

“When people come to our space there’s no judgment,” said Seitcher, “we need to let go of our past so we can move forward. So there’s no judgement and everybody is welcome. We opened it not to just First Nations, but we opened it to everybody. We gather Thursdays at 7 p.m.  We welcome you guys to join.”

“We see the partnership approach as vital to achieving the mandate as we bring together the strength of differing organizations, different cultures and different communities,” said Hurwitz. 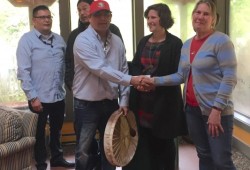 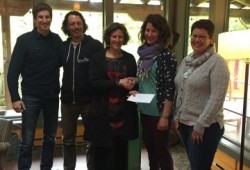