The forestry trailer is one of two mobile simulator-training units operated by VIU. Inside, students learn to operate familiar forest industry equipment in virtual reality, seated in realistic (and responsive) workstations in front of full-colour monitors with realistic (if not quite so loud) sound effects.

Jennifer Gallic is the Education and Employment Coordinator for Tseshaht First Nation.

“We are trying to get the younger generation interested in the forest industry, because there is a lot of opportunity for jobs coming up now and in the future,” Gallic said. “So they need to be thinking about their careers.”

The opportunities are two-fold. Due to the aging workforce, a high number of workers are nearing retirement age, while at the same time, First Nations are reclaiming their right to harvest and manage their natural resources.

“We put it out to our school district, and to our Nuu-chah-nulth kids, and tried to gather who was interested in forestry,” Gallic said. “This is Day 3 [over the course of one month] of our workshops. We have had different industry presenters come in from different areas of forestry, like technology, management and sciences.”

Jacob Dick is a Grade 10 student at ADSS. When Ha-Shilth-Sa met him, he was fully occupied, operating a tamper to stabilize the ground prior to pouring concrete. The student said he was comfortable with the simulator technology, and he completed the task successfully.

Jacob said he was first tipped off about the training program by his grandmother. He did see the forest industry as a career option - but not immediately.

“I would do this in the future,” he said. “But first I would go for a higher education.”

At 26, Aaron Jimmy is a little older than most of the students. Aaron demonstrated his skill with a (virtual) Komatsu dangle-head processor, which looks somewhat like a red ATV dangling from a cable. The processor de-limbs, de-barks and cuts to length. As Aaron manipulates the processor, it noisily makes cuts and burps out clouds of virtual bark.

“This is fun, putting your mind to it,” he said, noting that this was his first exposure to virtual reality technology. “I’ve used video games before. But this feels pretty real. I’m getting used to the ‘simulation’ part of it.”

Aaron said he would seriously consider work in the forest. But learning how to operate high-tech equipment of any kind is a help when looking for a new career option, he said.

VIU instructor Denise Gallant conducted the session. Gallant explained that the university operates two trailers, Forestry and Construction. Construction students have the opportunity to take on the real thing after completing simulator training.

Gallant said VIU offers a variety of training sessions. Friday’s session was a one-day visit, as part of a three-part series. Any student wishing to pursue an apprenticeship would be required to complete a four-week foundation program, followed by a five-week technical program. The candidate would select a specialty to certify in, then secure an apprenticeship.

Gallant said the classes attract a wide range of ages.

“It varies a lot. We get kids all different ages. We try to focus on students over 16, because, to come to the Pit, they have to be able to operate the real machines.”

The Pit is where students make the transition from simulator to the real thing. That is, in the area of construction and earth-moving, she noted.

Gallant said that, unfortunately, VIU does not have the real version of the hardware the students learned about on Friday, such as the dangle-head processor and the feller-buncher.

“The reason being is that you can only cut a tree down once,” she said. “So it’s hard to find someone who wants to sacrifice a grove of trees for students to play with.”

At the Pit, students learn to operate real heavy equipment such as excavators, bulldozers, graders, log trucks and backhoes, etc.

Gallant said the simulators are a good first step.

“This doesn’t replace machines; this just gives them an introduction,” she said. “It also helps with muscle memory for what the controls do. Then, they can get in a machine and move it comfortably.”

Cody Robinson said the forestry training sessions have been an eye-opener.

“I’ve been out of school for three years. I am trying to further my education in archaeology/anthropology,” he explained, adding that he has been part of archaeological digs since 2008.

Finds included flakes left behind from toolmaking, a dog skull, “and there were numerous bullet casings found on Keith Island,” said Cody.

Cody said he has thought hard about how he might earn a living while pursuing his education/experience in archaeology.

“I don’t think I’ll go into the forestry business. But it’s nice to get a taste of it,” Cody said. And learning how to operate the equipment could prove to be a big help in his pursuit of archaeology, he added.

Sharon Dick, a Grade 12 student at ADSS, said she was also considering her career options, and was happy to take part in realistic training.

Sharon said she would seriously consider a career in forestry, but on the technical/engineering side, rather than at the ground level. Despite having no experience on simulators, she said she feels comfortable behind the controls.

Sharon said she has yet to make a decision on whether to attend post-secondary school this fall, after graduation.

“I’m just looking around and thinking about it,” she said.

Gallant said VIU offers a variety of training sessions. Friday’s session was a one-day visit, as part of a three-part series. Any student wishing to pursue an apprenticeship would be required to complete a four-week foundation program, followed by a five-week technical program. The candidate would select a specialty to certify in, then secure an apprenticeship.

Gallic was asked if she had taken a turn on the simulators.

“I just went in. It’s harder than it looks,” she said.

Gallic said the horizons are looking brighter for First Nations youth than in previous generations.

“I’m pretty excited about what’s happening – or what’s going to be happening – in the future,” she said. ‘I wish we had this stuff when I was a youth.” 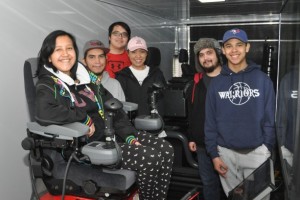 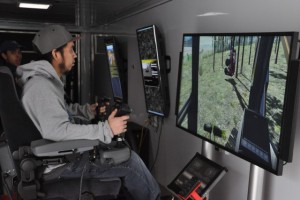 Aaron Jimmy operates a virtual "processor" that can fell, limb and de-bark a tree.