A group of concerned citizens held a walk to promote awareness of the drug overdose crisis in Hitacu on Wednesday. (Nora Martin photos)

Grace Frank encounters the effects of British Columbia’s opiod crisis every day as she tries to help family members in the grip of drug addiction, including her 33-year-old son.

“It’s a real struggle, especially when he gets dope sick,” said Frank, who lives in the Tla-o-qui-aht community of Ty-Histanis. “When he goes through his cravings it’s the worst thing to see. He’s angry, he needs his fix, he’ll do anything to get it.”

Frank regularly gets up in the night to check on him, sometimes rubbing his sore back as withdrawal symptoms take hold.

“His body aches when he’s craving, it really hurts his back,” she said during an April 25 interview with the Ha-Shilth-Sa, after last seeing her son in Port Alberni. “We couldn’t find him last night. He’s in Port again. It’s always my worst fear when the phone rings real late at night. I’m scared to answer it.”

This struggle has been faced by many in Nuu-chah-nulth communities, as well as across the province, where an average of four suspected drug overdose deaths occurred each day over the last year. Since 2015 the rising trend of illicit drug overdoses has become the leading cause of unnatural deaths in B.C., surpassing suicide, car crashes and homicide. The BC Coroners Service Death Review Panel found fentanyl to be a factor in four out of five of these fatalities, based on analysis of overdose deaths from July 2017. Indigenous people comprise 10 per cent of the lives lost, despite making up just 3.4 per cent of B.C.’s population.

In Port Alberni a “spike” in overdoses from heroin use led Island Health to issue an advisory on April 6, recommending those who witness such events to call 911, provide rescue breathing or administer Naloxone.

Frank is also taking action with a growing group of people who have loved ones affected by the overdose crisis.  On Monday, April 23 they held a walk in Ucluelet, and another is happening Wednesday, April 25 in Hitacu at 700 Waayi (Wya) Road. Frank said the group plans to continue these walks in other communities, including Tofino, Port Alberni and Victoria to encourage public awareness of the drug overdose issue. As the group collects donations, a major event is being planned for the Alberni Athletic Hall on June 30, which Frank said would include Naloxone training, Nuu-chah-nulth cultural cleansing and talks from recovering drug addicts.

“We have planned to get all of the families who have lost loved ones,” said Frank. “After every walk we do, we’re going to have a meeting.”

On the same day as the group’s walk in Hitacu the provincial government announced the Pill Press and Related Equipment Control Act, new legislation aimed to restrict the use of equipment that can make illegal drugs.

"Police have asked for more control and monitoring of who has use of pill presses," said Mike Farnworth, Minister of Public Safety and Solicitor General. "This bill is critical in bolstering police efforts to disrupt the supply chain and get counterfeit pills off of the streets and out of the hands of those who recklessly distribute death-dealing drugs."

As her group gathers support, Frank remains committed to do what she can to protect her family. She also has a 21-year-old grandson who is struggling with drug addiction.

“I went to find him yesterday and he was pretty wired,” she said. “I said, ‘Please be careful, and if you’re doing your drugs, go get it checked first”.”

In Port Alberni, this service is available at a supervised injection site at 3699 3rd Ave., open daily from 8 to 4 p.m. Frank has also advised her son to use this site.

“People always tell me just let him be, he’s an adult, but in my eyes I keep telling people that he’s my son until the day I die,” said Frank. “I always promised that I would be there no matter what for any of my children.” 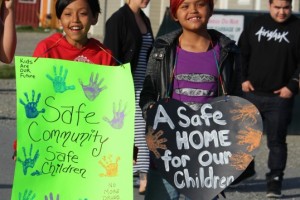 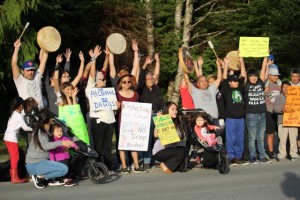