Brian Read pushed out the air bubbles in a practice for administering Naloxone at the Hupacasath House of Gathering on Wednesday.

Hupacasath First Nation hosted an opiod crisis workshop at their House of Gathering on May 2, with the goal of setting up a proactive response to the growing menace.

Kathleen Harris is an NTC Community Health Nurse. Harris said despite all the attention, the opiod crisis is not easing off.

“No. In fact, we’re seeing things get worse,” she said.

The victims are not simply hard-core drug users, she explained. And that makes designing an outreach strategy more difficult.

“We never know who’s going to fall victim to this,” Harris said, noting that even addicts who try to stop using are at risk.

“It may be people who have been using for a long time, but they become susceptible if they cut back for a while, and they go back to using – the resistance isn’t there.”

That is the irony, she explained. By temporarily lowering their drug intake and their threshold level, they become more vulnerable to an overdose in today’s uncertain drug market.

“The dosage is just really unpredictable. That unpredictability – and just not knowing what is in that substance,” she said.

While fentanyl has been identified as the most likely opiod to cause an overdose, the large-animal tranquilizer known as carfentanyl is 10 times stronger and has now begun to show up in the market.

In some cases, Harris explained, prescription fentanyl ends up in the hands of drug dealers. But nasty as that may be, the product coming out of illicit drug labs is completely unregulated, untested and potentially lethal in even the tiniest dosage.

“That’s the scary part: nobody really knows what’s being put in,” noted Harris.

Fentanyl substituted for heroin is bad enough, but in recent months, the synthetic opiod has been sold as cocaine, with lethal results. In some cases, even marijuana has been contaminated with the deadly powder.

NTC nurse Lucy Chiasson works at the street level, reaching out to drug users and potential drug users through the Health Outreach Program. She and Harris delivered what is becoming a familiar presentation on opiod use and abuse, followed by an overview on the use of the Naloxone kit. That was followed by the short instructive video, S.A.V.E. M.E. Harris said the goal is to move beyond just treating overdoses.

“Just doing the Naloxone training isn’t enough. Young people are dying out there,” she observed, before starting a question-and-answer session.

Is there a difference between Naloxone and Narcan? No. The two are identical substances.

If the patient doesn’t respond, can you use all three ampoules? Yes – but one at a time. And don’t forget to call 911. The opiod can last longer than the Naloxone.

Does it only work on opiods? Yes. But if the health crisis is not related to opiod overdose, Naloxone will not cause any harm.

Can the patient refuse to go to hospital? Yes.

Tom Tatoosh noted anecdotally that, in the past, elders occasionally concocted medicines using narcotics obtained on the street, including heroin, without leading to abuse.

Harris noted that, without knowing the history of home-prepared opiod medicines, she could only say that, due to the likelihood of fentanyl contamination, the use of any street-obtained opiod is potentially lethal, whatever the intention.

One attendee asked what happens if a recovered overdose victim goes back to using. Answer: it’s quite likely that they will. But the goal is to give them a chance to make a change in their lives.

The most critical advice for drug users? Don’t use alone. If you don’t have another person who uses, admit that you are using and let someone know when you do.

Tara Tatoosh attended the workshop with her son Robert.

“But I saw the advertising, and I decided it would be a good thing to have this knowledge,” she said. “There is a lot of this happening in the community… I think everybody should take this.”

Shaunee Foster said she already has a Naloxone kit and has completed the training, but decided she could use some extra knowledge.

“I have the kit, and it is collecting dust – which is good,” she quipped.

Sharon Charles said while she does not use drugs and does not spend time with anybody who does, she feels it is best to be prepared.

“If I am out somewhere and run into a situation, it is best if I know what to do,” she said. “There is that ‘instant-stress thing.’ I could go blank; I don’t know.”

Charles said by increasing her knowledge about opiods and by taking the training, she would be better able to deal with what could be a very stressful situation.

“I have a phobia about needles. So the more that I practice with the mock kit, I will become more comfortable,” she said. “So the training is also about helping me overcome my fear of needles – killing two birds with one stone.”

Hupacasath Chief Councillor Stephen Tatoosh said the NTC has agreed there is a need for a higher community involvement and a more comprehensive outreach capability. That would include providing better information and having after-hours responders.

Speaking to Ha-Shilth-Sa while attendees practiced filling syringes and plunging them into an orange, Tatoosh said opiod use is affecting all 14 Nuu-chah-nulth communities. NTC directors are working on a proactive strategy.

“We’re trying to think outside of the box – all 14 directors – on how we can work together either to stall [the crisis] or stop it,” he said.

NTC directors are now considering setting up training for volunteer groups, he said. Like Harris, Tatoosh noted that Naloxone training isn’t enough in itself. A trained person has to be in the right place at the right timeNoting the number of children who attended the workshop with parents and caregivers, Tatoosh said educating young people about opiod use is also critical. And this is a good start. 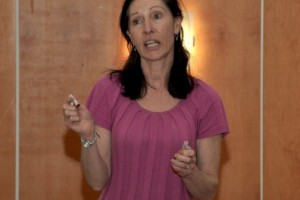 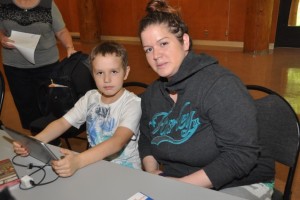 Tara Tatoosh brought her son Robert to the workshop. “I think everyone should take this training, she said.