Several notable fires, such as this blaze in Princeton, made 2017 one of the worst years on record for forest fires in the B.C. For Vancouver Island restrictions to open burning begin Friday, May 18. (BC Wildfire Service photo)

With a warm and dry summer expected on Vancouver Island, a prohibition on open fires begins Friday, May 18, at noon.

The ban on Category 2 fires was announced by the province today for the Coastal Fire Centre, which covers Vancouver Island, the Lower Mainland and the Sunshine Coast. Category 2 fires include piles less than two metres high and three metres wide, or grass fires less than 2,000 square metres in size.

This recent prohibition does not apply to campfires smaller than half a metre in height and width, although such a restriction will likely come into effect this summer, said Jeanne Larsen, an information officer with the Coastal Fire Centre. Although meteorologists are expecting a hotter than average summer on Vancouver Island, June rains could affect the forest fire outlook, she said. As of May 17 most of Vancouver Island had a “moderate” hazard rating with the BC Wildfire Service, with the region north of Campbell River registering as “high.”

“What we’re seeing right now is warmer and drier than usual in our long-term forecasting, however we haven’t yet had the June rains to contend with,” said Larsen. “The longer the period of time that we’re in a hot dry spell the more severe the situation becomes in the forest, and that could lead to more prohibitions, restrictions.”

The restrictions on open fires that come into effect May 18 do not apply to Haida Gwaii or the Fog Zone, a two-kilometre-wide strip of land along the west coast of Vancouver Island that extends from Port Renfrew, around the north of the island to Port Hardy. The Fog Zone stretches two kilometres inland from the high tide mark.

This new prohibition pertains to public and private land, but does not include municipalities that have fire prevention bylaws. First Nations reserves are also not included in the restriction, although the ban applies to traditional territory outside a reserve’s boundary. Treaty land can also be exempt from such provincial restrictions, depending on the legal stipulations of the agreement.

The ban on open fires within the Coastal Fire Centre comes a few weeks earlier than last year, when it was implemented June 7. By Aug. 1, 2017 all open fires and campfires were prohibited throughout Vancouver Island, including the Fog Zone, during what would be considered one of B.C.’s worst wildfires season in history. Vancouver Island didn’t have any notable fires, but elsewhere in the province the burning vastly exceeded what is normally expected in B.C. By the fall over 1.2 million hectares had burned, compared to an average of 151,041 hectares over the previous decade. More than 65,000 people were evacuated from their homes, and the province estimates the total wildfire cost to be $568 million.

The BC Wildfire Service cites that 57 percent of last year’s forest fires were sparked by lightning, while 40 per cent were caused by people.

“People lighting a campfire must maintain a fireguard by removing flammable debris from around the campfire site and they must have a hand tool or at least eight litres of water available nearby to properly extinguish the fire,” stated the provincial service in a press release. “They also must ensure that the campfire is completely extinguished and the ashes are cold to the touch before leaving the area for any length of time.” 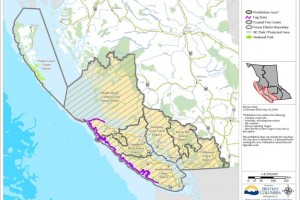 The recent ban excludes Haida Gwaii and the Fog Zone along the western edge of Vancouver Island. (BC Wildfire Service map)