Cody Savey was on B.C.’s gold-medal winning boys’ team at the National Aboriginal Hockey Championships in Nova Scotia this month. He’s pictured with Maryna Macdonald of the Ditidaht First Nation, who was on the fourth-place B.C. girls' team at the tournament. (Submitted photo)

Winning a gold medal at a national championship is now the highlight of Cody Savey’s hockey career.

Savey, who is from the Mowachaht/Muchalaht First Nation, was a member of the British Columbia squad that won the boys’ division at the recent National Aboriginal Hockey Championships (NAHC). Savey and his teammates defeated Saskatchewan 6-5 in overtime in the championship final of the Canadian tournament, which concluded on May 12.

Savey, a 16-year-old forward, was the lone Nuu-chah-nulth athlete on the winning B.C. boys’ squad.
Meanwhile, Maryna Macdonald, a member of the Ditidaht First Nation, was the only Nuu-chah-nulth player on the B.C. girls’ team. Macdonald and her teammates just missed out on bringing home some hardware as B.C. was edged 4-3 in overtime in the girls’ bronze-medal match.

Savey said it took some time for him to realize the magnitude of what he was able to accomplish with his teammates.

“It really didn’t hit me until a few hours later,” said Savey, who scored a goal and added an assist in the gold-medal game. “It was the best feeling in the world.”

During the latter portions of the championship final it appeared the B.C. squad would have to settle for the silver medal. That’s because with just over half of the third period remaining, Saskatchewan was enjoying a 5-2 lead. But B.C. managed to score three consecutive goals, including one with a mere second left in the third period, to tie the game and send it to overtime. Then it was also able to score the game-winner in the extra session.

Savey was rather confident his team would emerge victorious, especially since it was able to erase a three-goal deficit and force OT in dramatic fashion.

“I kind of thought we had the game then,” he said. “I knew that because we had fought back.”

The head coach for the B.C. boys’ team was former National Hockey League goaltender Dwayne Roloson, who lives in Victoria. Though Roloson is not Indigenous he is married to a First Nations woman.

Savey had not met Roloson is his hockey travels prior to the NAHC.

“He was a very skilled coach and he knew what he was talking about,” Savey said of Roloson, who played in 635 NHL games for six different franchises. “It’s what you would expect from an NHL player.”

Savey and his B.C. teammates kicked off this year’s nationals with a pair of round-robin victories, 9-2 over New Brunswick and 4-2 versus Team Atlantic. B.C. then tied Alberta 5-5 before losing 5-1 against Saskatchewan in its final round-robin outing.

B.C. advanced to the gold-medal game by jumping out to a 4-0 lead and hanging on for a 4-3 triumph against Manitoba in its semi-final match.

Savey now has a pair of NAHC medals. That’s because he was on the B.C. side that captured the bronze medal at the 2017 tourney, held in B.C. Cowichan Valley.

For Savey being part of the winning B.C. squad at the nationals was the second championship team he was on this season. He spent the 2017-18 campaign with the Campbell River Storm, which won its Vancouver Island Junior Hockey League championship.

Savey would also be eligible to take part at the 2019 NAHC, which will be held in Yellowknife. But he would actually prefer not compete in that event. Instead, he’s hoping to become a regular with the Seattle Thunderbirds in the Western Hockey League (WHL). The WHL is considered one of the top junior feeder leagues for the National Hockey League.

Savey had appeared in three games for the Thunderbirds during the past two years. He suited up for two games with the Seattle team during the 2016-17 campaign and one last season. Those Indigenous players that dress in more than 10 games in the WHL are prohibited from taking part in the NAHC. 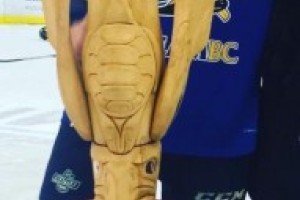