Mid-Island Ice and Packing’s Zeballos plant was bought in May by Ehattesaht/Chinehkint First Nation. The plant employs 7-10 band members seasonally and there are prospects for expansion. (Submitted photo)

Ehattesaht/Chinehkint First Nation is better equipped to take advantage of expanded commercial fishing rights with the purchase of Mid Island Ice and Packing plant in Zeballos.

Together with four other Nuu-chah-nulth communities — Ahousaht, Hesquiaht, Tla-o-qui-aht and Mowachaht/Muchalaht — the north Island nation won a B.C. Supreme Court victory in April that reconfirmed their rights to catch and sell fish from their territories.

“That was one of the drivers,” said Chief Counsellor Rose-Ann Michael of Ehattesaht/Chinehkint First Nation (ECFN), explaining the acquisition. “It’s a way to capitalize on what we’ve already been doing for years.”

Aquatic harvesting has always been integral to local culture. With the plant, strategically located at the gateway to rich Nuu-chah-nulth fishing grounds, they have the capability of moving fresh fish to markets within hours.

Michael said her nation had been in discussions with Mid Island Ice and Packing, the largest ice facility north of Tofino, for several years prior to the court decision. A feasibility study was done at that time, but they were unsuccessful at reaching a deal. After the owner returned to the table with a new offer, the two parties reached agreement and a second feasibility was completed.

She described the purchase, using ECFN funds with financial assistance from Nuu-chah-nulth Economic Development Corporation, as a step in the process of rebuilding.

“This is a step in regaining our economic independence for our people and our strategy is to use our local resources to become self-sustaining,” said Michael.

The T’aaq-wiihak fisheries ruling in April upheld a 2009 B.C. Supreme Court decision that recognized Nuu-chah-nulth fishing rights. The latest ruling cleared the way for the rights-based commercial fishing industry, granting priority over recreational fisheries, but with conservation at the forefront. Conservation reflects the time-honoured Nuu-chah-nulth principle of hishukish ts’awalk (everything is one; everything is connected).

Additional licences for salmon, groundfish and shellfish were offered to the five NTC nations by Dominic LeBlanc, federal minister of fisheries and oceans, before the latest court decision.

All five nations had previously established fishing plans that incorporate sustainable principles and values passed down by Ha’wiih (hereditary chiefs) and elders’ teachings. Greater opportunities are expected in the chinook and coho fisheries as well as for halibut, prawn, crab and gooseneck barnacles. In 2014, the group established Ha’oom Wild Seafood Products to collectively market their marine harvests (Ha’oom means “food” or “something good to eat.”)

While they celebrated the court victory, the five First Nations have some outstanding concerns relating to the court ruling with some details yet to be worked out. Like their neighbours to the south, ECFN families owned numerous fishing boats a generation ago but the fleet thinned out as they watched their share of the resource eroded by federal fishery management policies over the years.

Michael, who chose not to disclose financial details of the plant purchase, said it opens the door to a variety of new opportunities around the region and not just in fish processing.

“We’re in an area where there are very limited opportunities,” she said. “We need to focus on resource-based opportunities first because we’re in the middle of nowhere.”

She cited the example of her nation’s Aat’uu Forestry Limited Partnership, another community-owned enterprise. Three band members are employed by Aat’uu in the forestry jobs while the fish plant employs seven to 10 band members, though they are seasonal, not year-round jobs. They also operate We’Shuk, an oyster farm.

There are plans to expand beyond the increased activities of the T’aaq-wiihak fisheries.

“There are a lot of other spinoffs we can expand into,” Michael said.

There is a two- to four-year transition plan in place through a management consulting contract that goes hand in hand with the plant purchase. Retraining of two band members to manage day to day management will take place over a couple of years while Mid Island’s former owner Doug Farrington will assist in assuring a smooth ownership transition over a four-year period. 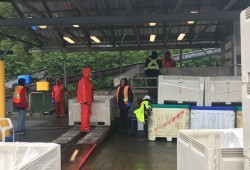