Grade 8 students from Alberni District Secondary School were welcomed to the Tseshaht Longhouse this week to learn about Nuu-chah-nulth worldview through story and song.

The educational session focused on storytelling and why the practice was, and still is, important to Nuu-chah-nulth people.

The session began with Tseshaht member Aaron Watts performing a song that was gifted to ADSS called We Are Strong. Watts then explained to students why First Nations songs are important and how they all tell a story.

“[Songs] are how we share and communicate our history and our knowledge. A lot of it is still that oral teaching that we hold on to and it’s through the song that we talk about that. It’s very important to listen when we sing songs,” Watts said.

He explained that the nation has many songs for many different things.

“It’s a very powerful thing what we do and it’s a very serious thing, never to be taken lightly, never to be joked about and never to be used in a bad way because we’re doing something where other people are listening,” he said.

Gus began with an ancient story from the Tseshaht First Nation about the creation of the first Tseshaht man and woman and provided history of the Broken Group Islands.

“Each tribe on the West Coast may have their own different version of how their tribe came to be or how they formed, but this is some of the stuff I had learned since I was young to even more recent,” Gus told the students. “A long time ago the Broken Group Islands were connected as one larger island…and where Benson Island is today is where our story begins.”

“Kapkimiyis took a mussel shell, they can get pretty big at some places in the Broken Group Islands, and he sharpened it like a knife,” Gus explained. “Kapkimiyis took that mussel shell and cut the inside of his thigh and then he scooped up the blood from his leg and he rubbed his hands and breathed life into it with his new powers giving this blood life. From this blood formed a small child that grew faster than normal children do.”

A little girl was born, Gus said, and then Kapkimiyis did the same thing on his other side breathing life into his blood and created a little boy.

“[Kapkimiyis] was very excited to be able to create life. Kapkimiyis decided to give these two children three gifts, the first gift was naming them. The first child that was born got the name Naasayilhm, meaning sky day, and the boy was named Naasiya’atu, translating to day down,” Gus said. “They represent the beginning of our time; night and day…they are the first Tseshaht man and woman.”

Gus said Kapkimiyis also gave the children a lake on Effingham Island that brought many resources to them and a whale bone club. He explained that Kapkimiyis became angered by quarreling between Naasiya’atu and Naasayilhm and so he punished them by destroying the banks of the river, causing clumps of the earth and rock to drift around until they became fixed in place, creating what it is today.

Gus told the students more stories about the significance of an archaeological dig that happened over three summers on Benson Island in 1999 and 2001 and about the meaning of the word Tseshaht and how the tribe got its name.

Following the stories, students were able to try fresh bannock and homemade jam.

Next, Daryl Ross, Tseshaht First Nation member, presented the students with history and knowledge on the importance of the longhouse to Nuu-chah-nulth culture.

“Storytelling is a part of the new curriculum and what we wanted to do was ensure that Nuu-chah-nulth worldview, the Nuu-chah-nulth perspectives, were understood by the kids and practiced by the kids - but also learnt in the most traditional environment that we can,” said David Maher, SD70 aboriginal education coordinator. “It’s really important because we really want to be helping kids understand Nuu-cha-nulth worldview.”

“It’s recognizing indigenous worldview and indigenous knowledge and, of course being from Port Alberni, we really want to work with our Nuu-chah-nulth communities,” he said. “We want to teach this with all other classroom learning, so this is an integrated part of what we’re doing.” 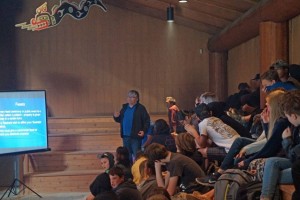 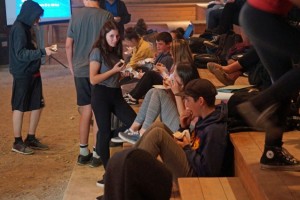 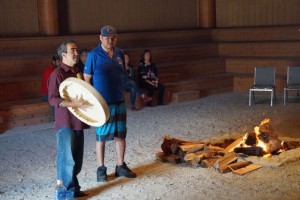 Aaron Watts explained to students why First Nations songs are important and how they all tell a story.