After completion of a new water system in Tsaxana, the Mowachaht/Muchalaht First Nation plans to hold a summer celebration worthy of the occasion.

“It is complete,” said Wayne Lord, public works manager. “We’re just going through one year of post-construction to make sure things run all right.”

The $1.2-million water treatment plant, along with a second well and second reservoir, was activated this spring after 18 months of construction. Twinning the system allows an increase in storage capacity to allow for additional maintenance. Previously there was one well, a water pumping station with no treatment and a single reservoir.

“Growth was one piece,” said Doug Neff, NTC capital projects manager, explaining the need for the new infrastructure. “The other piece was designing redundancy into the system. The driver was that there was only one well in the community and that could fail.”

Public works projects don’t normally call for much more than a ribbon-cutting and handshake or two, though the importance of a water system to any community can’t be overstated.

“It’s critical,” Neff said. “It’s the community water system and without water you don’t have a community. It’s as critical as it gets for any community system.”

Safe, clean, potable water is easily taken for granted, though not in First Nation communities where it’s too often unobtainable. In a report presented to the recent Assembly of First Nations Water Symposium, the Suzuki Foundation — noting that the right to clean water is an essential and basic human right — gave the Canadian government mostly “glass half full” ratings for progress so far in fixing water problems.

Across the country, about 80 First Nations communities remain on “boil water” advisories and another 21 rely on systems considered to be at high risk of contamination. Water system failures are common and in many cases replacement systems haven’t proven to be any more reliable.

“We were very fortunate compared to other nations,” Lord said of the process of planning, design and construction that went into the new facility. “It is to be celebrated. We plan to have a celebration.”

Water quality was never at issue in Tsaxana. Water capacity became a much more pressing issue when a house caught fire in 2014. The residents made it out safely but their home could not be saved.

“We basically ran out of water to fight the house fire,” Lord recalled. “It was totalled. The building was destroyed.” They’d lost pressure after drawing down the reservoir.

“We didn’t have the storage capacity. It was an eye opener for a lot of us, the capacity we did need. You take it for granted that the water just comes out of the tap.”

The previous system was built in the early 1990s when Mowachat/Muchalath First Nation relocated to the Tsaxana village site. They had already relocated years earlier, moving in the 1960s to Gold River from Yuquot, their outer coast village where an 18th century encounter with Capt. James Cook began the West Coast fur trade and led to the colonization of Nuu-chah-nulth territories.

After the 2014 blaze, the community continued to rely on the 1990s system until Thanksgiving 2016 when it failed entirely. They were without a working system for more than a week. Water was brought in from nearby Gold River until a new pump was installed. There are 61 residences in Tsaxana with 225 to 250 people using the water system.

While costly, the expenditure wasn’t a hard sell. Council was firmly behind the project.

“They supported us from Day One. They recognized that this was a need not a want.”

There were multiple problems with the 1994 system but most critical was the absence of system redundancy — basically a backup plan — and that added to the urgency. Indigenous and Northern Affairs Canada officials recognized that, Lord said. With additional support from NTC, the nation plowed some of its capital dollars into the project over a two- to three-year period.

A contract was awarded in 2017 to McElhanney Consulting, the oldest employee-owned engineering and land surveying firm in Canada. Several band members were employed in construction. Several more have been hired for the post-construction phase to run tests. The new operation involves both chlorine and ultraviolet treatment.

In all, $2 million was spent upgrading a system expected to serve Tsaxana for the next 30 to 40 years. The entire process including construction went relatively smoothly apart from some minor hiccups, Lord said.

“Basically, we wanted a system with all the bells and whistle and to have help close by if something went wrong,” he said. 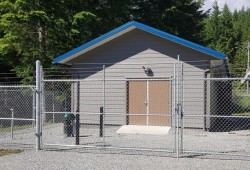