Port Alberni’s Friendship Center was filled with Indigenous and non-Indigenous people in celebration of First Nation culture and identity for National Indigenous Peoples Day on June 21.

“Today is a day of sharing and showing our culture which we should be proud of,” said Wally Samuel, Nuu-chah-nulth elder.

The government of Canada identifies National Indigenous Peoples Day, formerly National Aboriginal Day, as a day for all Canadians to recognize and celebrate the unique heritage, diverse cultures and distinguished contributions of First Nations, Inuit and Métis peoples.

National Aboriginal Day was announced in 1996 by then Governor General of Canada, Roméo LeBlanc, after consultations and statements of support for the day made by various Indigenous groups. The name was changed in 2017 by Prime Minister Justin Trudeau to National Indigenous Peoples Day.

Samuel, from the Ahousaht First Nation, said a dedicated day for Aboriginal people is an opportunity to learn about First Nation’s culture that was almost lost and taken from them.

“[First Nation culture] was outlawed for a while, that’s why some people are still timid or afraid to show their pride,” Samuel said. “Some people were ashamed in being First Nations and hopefully some of the young people won’t be shy or ashamed.”

Samuel sits on the City of Port Alberni’s reconciliation committee. He said race relationships is one of the more important aspects towards reaching reconciliation.

“It’s more or less educating the community that we’re here, we’re contributors,” Samuel said. “More people in the community are understanding what really happened to us. Even our own Aboriginal people are not aware of how us people who were born in the 40s and 50s were treated and what happened to us.”

Mayor Mike Ruttan said a day for Indigenous people is particularly important in Port Alberni because it indicates the extent to which the city and Aboriginal people are able to work together towards reconciliation.

“[The reconciliation committee] has done a lot of work over the last couple years,” Ruttan said. “The basic message is, together we’re way stronger.”

Ruttan added that in the spirit of reconciliation he recently suggested to the committee to give Port Alberni’s Canal Beach a second First Nation name.

“A Nuu-chah-nulth name, so we can have the two names,” he said.

During the celebrations, vendors, live music and service providers were set up around the Friendship Center. There was face painting and cotton candy for the kids and a seafood-inspired lunch with salmon cooked over the fire.

The centre’s executive director, Cyndi Stevens, said she was happy with the day’s turn out. She said National Indigenous Peoples Day is important to her because of the connection it builds with the community.

Gord Johns, MP for Courtenay-Alberni, stopped by to recognize the importance of celebrating Indigenous people.

“I’m grateful to have lived on Nuu-chah-nulth territories for the last 25 years,” he said. “Today is an important day.”

He asked the crowd “who thinks today should become a national holiday?” To which he received loud applauses from those in attendance.

Scott Fraser, minister of Indigenous relations and reconciliation and the MLA for Mid Island-Pacific Rim, was unable to be in attendance, but he wrote a brief letter reminding people to recognize the importance of reconciliation.

Hugh Braker from the Tseshaht First Nation said Indigenous Peoples Day is a day to be proud to be Aboriginal.

“Today is to reflect on how your grandparents suffered so you can be where you are today,” he said. 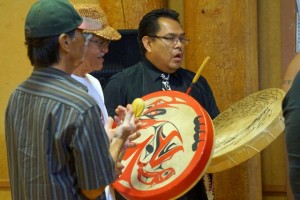 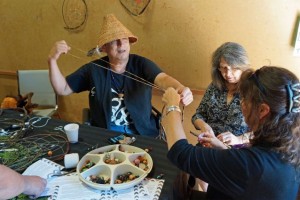 A man who identifies as Bear makes dream catchers during National Indigenous Peoples Day on June 21. 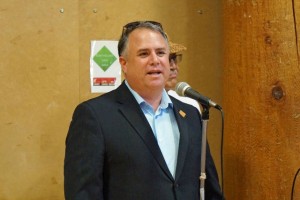