Marcel Martin, who went missing in the waters off of Tofino June 15, is pictured with his wife Ivy and three children. (GoFundMe photos)

Three young Tla-o-qui-aht fathers vanished after an early morning boat accident near Duffin Cove, Tofino, on June 15, 2018. There were five men aboard the boat when it inexplicably overturned between Duffin Cove and Felice Island. One survivor swam ashore and the other was pulled from the water south of Felice Island sometime after 3 a.m.

The two survivors were visiting from another part of Canada.

The oceans, beaches and islets were scoured by searchers who came from all over to assist. Intensive searching went on for about two weeks and has since been scaled back.

The boat was recovered from the bottom of the ocean, near Duffin Cove, June 19. Searchers also recovered floating debris from the boat in the days following the incident. More than two weeks later nothing new has turned up and the search has been scaled back.

“We’ve asked local guide outfitters to keep an eye out for anything unusual on the ocean or beaches,” said elected Tla-o-qui-aht Chief Moses Martin. There is no one actively searching the ocean but Martin says people continue to walk the beaches, searching for their missing loved ones.

“This has been a difficult time, especially to lose three at the same time, it hits pretty hard,” said Martin. “There are no words to describe what we are going through; the empty feeling, the loss and we keep wondering how three men, well-experienced on the water…what happened and why them?” he asked.

For now, the family hopes to recover their loved ones so that they can get some answers.

As tough as it is for the community, it is even harder for the wives and the children left behind. Marcel Martin leaves his wife Ivy and their three children. Their eldest graduated this year and has plans for university in the fall.

Terrence Brown Jr. leaves behind his spouse Selena and their infant daughter.

Carl Michael, brother to Marcel, leaves behind a young daughter who is being cared for by his mother.
A family member has launched a fundraising drive to help support the surviving immediate family.
“Their children are not only missing the love and guidance of their Dad's (sic), but their main providers as well,” reads the story on the GoFundMe campaign.

So far, $33,350 of the $90,000 goal has been raised. All donated funds will be split evenly between the children and their mothers or care giver.

Funds raised are intended to assist the surviving family with the basic necessities of life as they continue their search and cope with their losses.

For more information about the fundraising campaign go to: https://ca.gofundme.com/providing-for-the-children 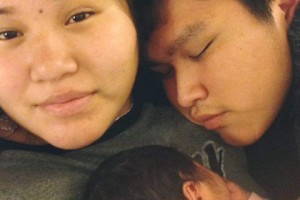 Terrance Brown Jr. (right) has also been missing since June 15. He is pictured with his partner Selena Howard and infant daughter Bunny.