Wes Hewitt of Port Alberni Shelter Society holds an artist’s rendering of a supportive housing project that will open on a former hospital site in December.

The new face of poverty is an aging one.

Increasingly, people seeking temporary shelter in Port Alberni — many of them from First Nations in Nuu-chah-nulth territory — are seniors.

“Seniors nowadays are having to make the choice, ‘Do I pay my rent or do I eat,’” said Wes Hewitt, executive director of Port Alberni Shelter Society.

Since 2009, poverty has surpassed mental health and substance addiction as the leading cause of homelessness, Hewitt noted. In B.C. communities, and Port Alberni is no exception, the problem is exacerbated by soaring housing costs and rock-bottom vacancy rates. Last year, a homeless 82-year-old had to resort to a bed at the 8th Street shelter, one of several providers of temporary beds in the city.

“You see people who have no mental health or substance issues coming through your door strictly as seniors, so you know that it’s poverty,” said Hewitt. “When you’re living on Canada Pension, there’s nothing that you can afford or find the rent, what do you do or where do you go if you have no family?”

To offer some answers, the society has been working for years to develop new supportive housing in the city, a project finally confirmed in late June. With $7.4 million in provincial funding, 30 units of modular housing should be available for occupancy by year’s end on the former site of West Coast General Hospital, across the street from the existing Port Alberni Shelter. In addition, the facility will include 20 new shelter spaces with extra space for extreme weather conditions and for families rendered homeless for any number of reasons such as fire.

People of all ages, including families and individual seniors, will have somewhere to turn, a place where they can live in dignity while having ready access to counselling, medical services, meal services as well as life skills and employment programs.

Those services are not readily available in the countless campsites and sprawling tent cities that have become commonplace around B.C. cities in recent years. Last week alone in Nanaimo’s tent city, a woman was shot in the face with an air gun, a tent caught fire and another woman died, one among multiple drug overdoses. Pushing for more humane alternatives, residents have dubbed the waterfront encampment “Discontent City.”

Tent cities represent a “Catch-22” for poverty and housing advocates, Hewitt said. While they are unsafe and scorned, they put pressure on governments to fund long-term solutions.

"Homelessness is an acute issue in B.C., and the new housing development in Port Alberni will help provide relief to people living without shelter and to families dealing with the pain of a loved one who is in need of support," said Scott Fraser, MLA for Mid Island-Pacific Rim when announcing the Port Alberni housing project. "The combination of new shelter spaces and modular housing units allows us to quickly offer that support — safe places to live with access to the services people need to overcome the experiences that led to homelessness in the first place," Fraser said.

The project has been a long time coming. Since 2010, the society — founded by local First Nations in 1972 — has been working on building more supportive housing. As a small, non-profit group, they didn’t have the necessary financial resources without the assistance of provincial or federal governments.

Through the NDP government’s efforts to address homelessness — pledging to build 10,000 housing units over the next 10 years — and a partnership with B.C. Housing, the City of Port Alberni and Island Health (which owns the land), the project is finally about to break ground.

The homes will be funded through the Building BC: Rapid Response to Homelessness program, part of a province-wide investment of $291 million to build 2,000 homes across B.C., along with $170 million over three years for 24/7 staffing and support services.

Use of modular units constructed in advance by Muchalat Group in Cumberland allows the new housing to be ready for occupancy in seven months as opposed to 18 months or more. While the new facility won’t solve the housing shortage, the additional capacity means that people can obtain critical support to leverage their way to lasting solutions, such as one of 30 units of self-contained, single-occupancy housing.

“We’ve run over-capacity since I arrived here in 2009,” Hewitt said. “And we’re not the only ones. It’s that way across the Island.”

He estimates there are about 300 homeless people in Port Alberni alone, far more than the homeless counts have suggested. About 35 to 40 percent of shelter clients identify themselves as First Nations.

“We do serve quite a number First Nations and it’s from a fairly large geographic area,” Hewitt said. “We get people from as far north as Kyuquot and as far south as Ditidaht for long-term and short-term housing. Unfortunately, there is actually an over-representation of First Nations people who go through the shelter system here.”

A shortage of housing on reserves is a contributing factor. Intergenerational trauma, cultural genocide, racism and discrimination were other factors cited in a report last year by the Canadian Observatory on Homelessness.

The new housing project is expected to be open for residents by December 2018.

“It will help but it’s not going to solve our housing issues,” Hewitt said.

He believes that will only be achieved through additional supportive housing projects proposed by the society and others in the community, including Alberni Community and Women’s Services Society and the Canadian Mental Health Association. 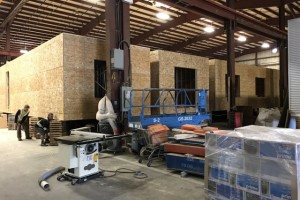