A Tofino fish processor, one of two in Nuu-chah-nulth territory that triggered a sector-wide audit over wastewater concerns, plans to adopt an effluent treatment system.

The investigation was spurred by media coverage of “blood water” video shot last year by an environmental activist concerned about potential impact of effluent on wild salmon and the marine ecosystem.

Tim Rundle, Creative Salmon general manager, said a full-scale trial project to treat Lions Gate Fisheries effluent has been in development since late 2017 after the video footage prompted a visit by regulators.

“Although it’s a dated document, our processing plant has followed the permit issued by the provincial environment ministry,” Rundle stated in a news release.

“Even though the plant was authorized for screening and discharge, Lions Gate and Creative Salmon recognized the public and resulting government scrutiny,” Rundle said. “We are always looking for ways to improve our operations and this is exactly what we are doing at the plant with this effluent treatment project.”

Based on ministry inspections, the sector-wide audit found widespread noncompliance with permit requirements, including plants where fish waste effluent exceeded volumes and pollution standards. Overall, 72 percent of facilities were found to be out of compliance and the government promises stronger measures.

“This audit clearly tells us more work needs to be done to ensure our coastal waterways are safe for all wild fish stocks,” said George Heyman, minister of Environment and Climate Change Strategy. “The industry has been largely operating under an outdated permitting regime, going back several decades. We are taking immediate steps to ensure permits are updated and strengthened at fish processing facilities throughout B.C.”

Analysis of wastewater during the audit showed the common presence of piscine reovirus (PRV), not an unexpected find since the virus is endemic in Pacific salmon.

A review of PRV risk to wild salmon — completed by B.C. Centre for Aquatic Health Sciences in conjunction with the audit — concluded that research has been inconclusive: “Further science studies would be required to determine and evaluate any associated marine environmental or public health risks associated with such effluent discharges.”

Critics of the industry practice view it in the same vein as marine-based fish farming — a threat not only to salmon and the ecosystem but to other industries as well.

Lions Gate Fisheries was listed as out of compliance because effluent from a boat was bypassing the screening process. That was corrected soon after inspection. The plant was also cited for incomplete flow monitoring, sampling and reporting. Ucluelet Harbour Seafoods, which operates in Ucluelet First Nation, was also found to have been out of compliance due to incomplete monitoring, sampling and reporting.

Ben Beens, general manager of the Ucluelet plant, indicated that the waste permit was outdated. In any case, the company will be happy to improve its water and wastewater management, he added.

“It was a pretty positive inspection,” Beens said in an emailed statement. “I think the changes that need to be made are simple and welcomed. The waste permit is based on seafood products we no longer produce.”

The Ucluelet plant produces only wild seafood and does not use chemicals to treat wastewater, he noted.

“We are working with the regulatory board to update the permit to our current processed products and also make sure we record 100 percent of the required data.”

At the Tofino plant, the ministry has approved a permit amendment to allow the treatment trial.

“We will be treating and disinfecting the effluent with ultraviolet prior to discharge,” Rundle said. “We are confident the trial project will be effective as it was designed by an expert consultant. Our expectation is that the full-scale trial will lead to a permanent treatment system.”

Most of the current permits authorize treatment works using guidelines developed in 1975 and are limited to fine screening, the ministry noted in its audit report. That doesn’t mean treatment is a straightforward proposition for all fish procession operations:

“Many of the permittees indicated that the costs associated with additional treatment would be too much of a burden on their current budgets and would likely mean that in the event that they are required to add additional treatment, they would have to discontinue the operation of their facilities,” the report states.

The Tla-o-qui-aht protocol with Creative Salmon is up for review by band council with a decision expected this fall. Councillor Terry Dorward said concerns about fish farming and processing are central to debate in the community.

“I think it’s completely irresponsible,” Dorward said. “The fish farm industry has over the years been responsible for basically dumping the waste into coastal waters that many other industries rely on — tourism, clam beds, fishing.”

He advocates broad collaboration and a more responsible, holistic approach to resource management through implementation of the Cohen Commission recommendations on salmon.

“If there is going to be any compromise on fish farms, period, they need to go on land,” he added. “The technology is there, we just need the will.”

Conservation groups in Tofino point to research by geneticist Kristi Miller, a Department of Fisheries and Oceans scientist, showing a link between PRV in farmed fish and mortality in wild salmon.

“We really are at risk of losing wild salmon, an iconic species, and even the premier and his environment minister have acknowledged this,” said Bonny Glambeck, a representative of Clayoquot Action. “We really are playing with fire.”

Governments are ignoring the “precautionary principle” they’ve committed to upholding, she said: The principle posits that when an activity threatens harm to health or environment, precautionary measures should be taken even if some cause and effect relationships are not fully established.

While attempting to accommodate industry, government is not doing due diligence to protect the future of marine ecosystems, said Jeh Custerra, a campaigner with the group Friends of Clayoquot Sound. The same applies to marine-based salmon farm operations, which threaten migrating wild stocks, he said.

“We understand that a lot of jobs and money depend on the industry, but it’s becoming more clear that the industry is not sustainable,” Custerra said.

“From a traditional point of view, we have a responsibility to those fish. Cleanup should be at the forefront. We’re not going to have any fish if this continues on.” 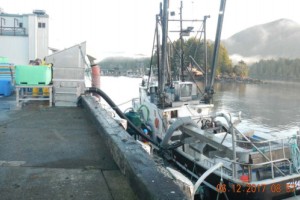 A fish processing plant in Tofino. (Ministry of Environment and Climate Change)