Sproat Lake Volunteer Fire Department were called out to a forest fire burning near Turtle Lake, just west of the Alberni Valley Regional Airport on the evening of Monday, Aug. 6. The fire is believed to be human-caused and came as the B.C. Day long weekend was drawing to a close.

The fire is estimated to be 2.1 hectares in size and is being managed by the BC Wildfire Services and the Sproat Lake Fire Department.

A blanket of smoke hovered over the Alberni Valley on Monday. Helicopters carrying buckets of water could be seen battling the blaze.

By Tuesday afternoon, Aug. 7, the fire is "being held", according to Dorothy Jacobson, Fire Information Assistant for the Coastal Fire Centre - Parksville.

“There are four fire statuses that we use: out of control, being held, under control and out,” she told Ha-Shilth-Sa.

There are eight firefighters from the Coastal Fire Centre actively working and suppression efforts have been successful so far.

Firefighters from the Sproat Lake Volunteer Fire Department worked through the night to control the blaze. Jacobson did not know if they continue to work Coastal Fire Center firefighters.

Jacobson said that unless there’s a change in weather conditions, for example, a big wind, they do not expect the fire to spread. 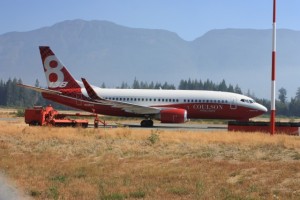