After observing weeks of smoky skies and elevated health concerns for those engaged in outdoor activity, the First Nations Health Authority has postponed the Heliset Hale Relay until further notice.

In a statement issued Aug. 24, the FNHA noted air quality rated 10+ through most of Vancouver Island, a number that brings a “very high health risk” according to the BC Air Quality index. Due to high concentrations of smoke particles from wildfires, during this rating people are advised to avoid strenuous activity outdoors, particularly children and the elderly.

“The First Nations Health Authority has been monitoring the forest fires burning in the Vancouver Island region and the Air Quality Index,” stated the FNHA. “As a health and wellness partner, we want to ensure the safety and well-being of our runners and communities. We recognize that opportunities for training have been limited due to air quality, and we do not want anyone to put themselves at risk of physical injury.”

Originally scheduled Sept. 9-21, the relay was planned to introduce a new format for the cross-Vancouver Island run. The event, which has been held annually since 2013, previously saw a core group of participants run across Vancouver Island to raise awareness for suicide prevention as well as mental health and wellness.

The 2017 relay saw nine runners criss-cross the island, running between 5-10 kilometre shifts, over the course of two weeks. Collectively running anywhere between 50-100 kilometres per day, they travelled about 900 kilometres over a two-week period.

Organizers, however, had changed things up for this year’s event.

“We’ve done a call out for community runners,” said Janice Johnson, the community engagement co-ordinator for the First Nations Health Authority (FNHA), which has taken over organizational duties for this year’s event. “Communities are identifying teams to join the relay.”

The 2018 relay was expected to start in Port Hardy and conclude on the Tsarlip First Nation.
Instead of having just a few individuals run all or most of the days of the relay, the plan was to get communities to have local runners take part on the day the event visits their community or nearby locations.

Kelly Paul, a member of the Tsarlip First Nation, founded the Heliset Hale Relay in 2013, in honour of her brother who committed suicide.

“She wanted to have her traumatic experience turn into a positive one,” Johnson said. “It was part of her healing.”

Paul took on many of the key organizational details during the first five years of the relay.

“She’s taken a step back this year,” Johnson said. “And the First Nations Health Authority has agreed to fully sponsor the event this year.”

The FNHA provides programs and services to First Nations people throughout British Columbia. The Heliset Hale Relay is a perfect extension of services the FNHA already provides. Besides the obvious running portion of the relay, daily segments were also planned to include a gathering for people to give speeches or simply talk about suicide prevention and mental health.

“There is a high suicide rate in our First Nations communities,” said Johnson, a member of the Tseshaht First Nation. “This is why we’ve agreed to sponsor such a great cause.”

Though organizations like the FNHA have greatly increased the awareness for suicide prevention and mental health initiatives in recent years, Johnson said there is still a tremendous amount of work to be done.

“There is a great need for more awareness,” said Johnson, who ran several legs in last year’s relay and will scale back her running efforts but still take part in the next event. “It’s a tough conversation to have. Having this opportunity will help create that comfort.”

Another previous relay participant who planned to run again is Jim Charlie, a member of the Tsarlip First Nation. The 45-year-old ran last year with his son Shyquintin, who is now 20. The elder Charlie is all in favour of the format change which would see runners taking part in their own communities.

“It gets more people involved,” he said. “Hopefully the youth will take on the challenge to participate.”

Jim Charlie planned to run in some portions of the relay again but was unsure whether his son could take part due to work commitments.

The eldest Charlie opted to get involved with the Heliset Hale Relay because two of his siblings died by suicide. He lost his brother 20 years ago and his sister seven years ago. Charlie finds running and talking to others about his life experiences to be therapeutic.

“It helps heal the soul,” he said. “And it helps my children understand what I went through.”

Besides his son, Charlie also has two daughters, aged 19 and 25.

The First Nations Health Authority is yet to announce a future date for the postponed relay. 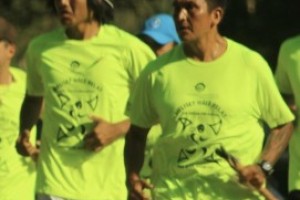 Jim Charlie and his son Shyquintin were two of the participants in the 2017 Heliset Hale Relay. (photos courtesy Janice Johnson)