Travis Thomas has been reported missing since Aug. 7. (Facebook photo)

The search continues for Travis Thomas, 40, who went missing Aug. 7 at Bartlett Island in Ahousaht territory.

According to RCMP Staff Sergeant Annie Linteau, on Aug. 9, Ahousaht RCMP received a report that Travis Damon Thomas, who was last seen on Bartlett Island, could not be located. His family had already conducted a search of the island before contacting police.

According to sources, Thomas was only on the island a few days when he disappeared.

Searches were conducted in the following days by the RCMP with support from Ahousaht and Tofino search and rescue teams, who conducted a thorough search of the island.

In addition, the Canadian Coast Guard and RCMP Air Services also took part in the search.

Linteau said that preliminary searches were followed by additional efforts from the RCMP Police Dog Service, a search and rescue dog and an independent search manager from the Comox Valley Search and Rescue.  This person was engaged to conduct an external review of the detachment's search efforts to date.

"We are very concerned about the safety of Travis Thomas and are doing everything we can to locate him", says Sgt. Todd Pebernat, Ahousaht RCMP.  "Our search is unfortunately very difficult given the island's extremely dense forest and brush area.  It has made it difficult for ground searchers to probe thoroughly into these regions of the island".

Family and friends cling to the hope that he is still on the island. Their hopes are bolstered by reports of sightings of Thomas along the shoreline by people searching from boats.

Search parties leave Ahousaht each day for the 20-minute boat trip to Bartlett Island, which is estimated to be about 1.6 kilometres long and one kilometre wide.

While the island is not very large, it is rugged, rocky and is forested with old growth trees and dense shrubs. It took 90 minutes to circumnavigate the island at low speed. The island presents a wide variety obstacles for search parties.

While the August weather is calm and sunny, Bartlett Island is often shrouded in fog. Its jagged rocky shores are crusted with sharp barnacles and pounded by waves on the open ocean side.

But the rocks and shoreline provide food in the form of chitons, sea urchins and, at very low tide, abalone. The thick, shrubby shoreline is loaded with berry bushes.

The Ahousaht RCMP, along with the Regional General Investigation Section, are continuing their investigation and are looking into the circumstances of Travis Thomas' disappearance.  Travis's family have been kept appraised of the search efforts and developments to date.

Police have no information to suggest that Travis Thomas has left Bartlett Island but are open to the possibility that he may no longer be there.  Reported sightings are being followed up on. 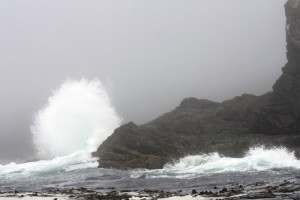