Helen Dick was one of six Nuu-chah-nulth members recognized for community contributions at the NTC's Annual General Meeting this week. (Eric Plummer photos)

As she worked translating from Nuu-chah-nulth dialects, Helen Dick rose from her table at the tribal council’s annual general meeting to receive recognition. Wrapped in a blanket after being reminded of her generations of service to her community, the Tseshaht member spoke first in Nuu-chah-nulth, then English when handed the microphone.

Dick served on the treaty team as a negotiator for Tseshaht over many years, and has worked as a nurse and volunteer at West Coast General Hospital, as well as a legal clerk. She has taken an ongoing role in fundraising for the Tseshaht First Nation’s events for elders, and as an advocate for health and wellness she serves on the NTC’s Disability Access Awareness Committee.

“I plan to continue to do this as long as I can,” said Dick of her ongoing efforts.

The Tseshaht elder was the first to be recognized at the House of Huu-ay-aht on Wednesday, Sept. 19 in Anacla, where the NTC’s two-day AGM was held. The recognitions resulted from the tribal council asking its First Nations to identify certain members for their inspirational contributions.

Also present at the event was Audrey Smith, a Nuchatlaht mother and grandmother. After being blanketed Smith mentioned some of the topics previously discussed over the day, including homelessness, children in care and addiction.

“My heart goes out to them,” she said. “I try to bring them comfort.”

“We’re very lucky to have Audrey,” he said. “You can’t stop Audrey from going into a kitchen, and we appreciate that.”

Smith described her transition as an adult into her current role.

Agnes Oscar of Ka:'yu:'k't'h'/Che:k'tles7et'h' was honoured for her 41 years of service to the First Nation. This time began as a volunteer for the first few years, followed by a role as a pre-school teacher and with the Red Cross.

“After that she took training to be an accountant in Victoria,” said NTC Vice-President Andy Callicum.

Oscar returned to her First Nation to manage the books, often volunteering again when needed.

“She is an honourable lady, takes care of everyone,” said Ka:'yu:'k't'h'/Che:k'tles7et'h' Chief Councillor Peter Hanson, who accepted the award on Oscar’s behalf.

Three Ahousaht members who couldn’t make it to Anacla were also recognized, beginning with Marlene John.

“Marlene is a wife, mom and grandmother who shows her dedication to Ahousaht by being a huge support in the background,” said Sayers.

“I think we probably have a Marlene and an Audrey in all of our communities,” added Ahousaht Chief Councillor Greg Louie.

He noted that John has been a regular support to those searching for Ahousaht members who went missing in the waters of Clayoquot Sound this summer.

Michael (Luke) Swan also participated in those searches, the latest in years of service to Ahousaht that began when he was a child.

“When he was a young fellow, probably around Grade 5, one of our community elders needed a scooter,” recalled Louie. “He fundraised for the elder. He did a bike-a-thon from Tofino to Port Alberni.”

Not yet 30 years of age, as a teenager Swan went on to volunteer with Citizens on Patrol to ensure people get home safe. He has served as a councillor, on Ahousaht’s search and rescue team for over a decade and is currently manager of the First Nation’s fisheries department.

As a respected elder, Louie Frank Sr. rounded out the Ahousaht members recognized at the event.

“We’re so grateful of the giving heart that Louie has,” said Greg Louie.

“Louie Frank Sr. has a wonderful voice; he came and sang at my mother’s funeral,” Sayers recalled of the cultural mentor. “He is often called and relied upon for his knowledge and guidance. Louie is there supporting families when they’re facing difficult times with the loss of a loved one.”

The recognition portion of the AGM concluded with the announcement of Simon Read’s retirement from the NTC. Currently the tribal council’s director of health, Read began his 34 years at the in NTC in 1984 as tribal planner.

“When I came to the NTC, I believe there was 17 staff and there were essentially no services - it was an advisory and political organization only,” he said. “I’ve seen this organization meet so many challenges over the years and grow so much.”

Read was credited with being instrumental in the development of the NTC Health Plan in 1986, which led to the first transfer of services from Health Canada in 1988. Respectful of traditional Nuu-chah-nulth teachings while being astute of different levels of government, Read worked on the beginnings of the Quu’asa program, and leaves the organization at the end of January having seen it expand to offer services to 10,000 Nuu-chah-nulth members throughout Vancouver Island and the West Coast.

“Simon’s willingness to put in extra time and effort to help NTC at critical times demonstrated a commitment to excellence that we have come to depend upon,” said Callicum. “While we are reluctant to accept, we will honour and respect Simon’s personal decision as he prepares for the next adventure in his life journey.”

“There has been a huge transformation, and I’m really pleased to have been a small part of that,” reflected Read. 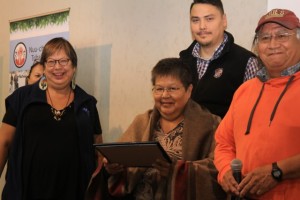 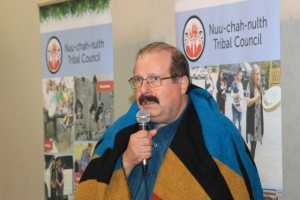 Simon Read was also blanketed at the event for his 34 years of service to the NTC as an employee.