When she was a student at the Alberni Indian Residential School, June Watts would run off to pick food from nearby fruit trees in an effort to ease her constant hunger.

“She’d run away to the orchard so they didn’t have to be hungry,” recalls Gail K. Gus of the stories her mother told her from the time at the institution. “They would get in trouble for doing it, but they would do it anyway.”

Now 30 more fruit trees are growing a few dozen feet from the former site of the school, with the Nisma Edible Tree Project. The latest edition to the Tseshaht community garden was unveiled on Friday, Sept. 21, which is located behind the main Nuu-chah-nulth Tribal Council building on the former site of the residential school.

Nisma translates into ‘the land’ in Nuu-chah-nulth, and by offering pears, cherries, apples, hazelnuts, plums and peaches, Gus hopes the new trees will allow future generations to “have a healthier life and not always have this stain on us as Tseshaht - but a beauty.”

The trees were recently installed with $4,000 in support from Trees Canada, a national charity that supports planting and maintaining trees in settled areas. Trees Canada gathers corporate sponsors to back their projects; in this case Fedex stepped forward to finance the project.

Trees Canada has helped to plant over 90 million trees over the last 27 years, and has supported almost 100 edible tree gardens across the country.

“It has to do with issues around food security,” said Brian Fisher, a representative from the charity who came for the official opening of the Nisma Edible Tree Project. “On Vancouver Island we only grow about eight per cent of the food we eat.”

Community self-sufficiency and improved health are the major motivations behind the community garden, said Gus.

The Tseshaht community garden began over five years with just two six-foot beds, but has grown exponentially since. 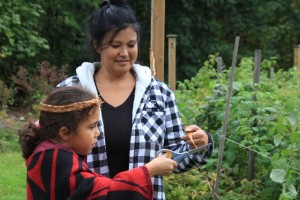