Kyuquot moves ahead with the construction of a traditional big house, 80 years after 24 of them were destroyed. (Eric Plummer photo)

Near the shore of Aktis Island, a few crumbling houses remain. Pummelled by generations of Kyuquot Sound’s wind and rain, the sagging structures are the most visible remnant of the island’s last human inhabitants from over a decade ago.

But upon a closer inspection of Aktis one can detect large depressions in the land, signs of a settlement in the thousands that once occupied the island near the existing community of Kyuquot in northwestern Vancouver Island. There were once 24 longhouses by Aktis’s shore, until the structures were destroyed in the 1930s under an order from Canada’s Department of Indian Affairs.

“I remember one time I went to school, by the time I got back it was all gone,” recalls Hilda Hanson, an elder with the Ka:'yu:'k't'h'/Che:k'tles7et'h' First Nations.

This was the period of the potlatch ban, a federal law that made those who participated in the practice “guilty of a misdemeanor, and shall be liable to imprisonment,” according to the past legislation. After the law was passed in 1880, potlatches continued to be held under the radar of Indian agents, due to the importance of the events to the lives of West Coast First Nations.

A decade before the Aktis longhouses were set ablaze, one potlatch on the other side of Vancouver Island attracted the attention of federal authorities in Alert Bay. ‘Namgis Chief Dan Cranmer held a six-day potlatch to celebrate a wedding, only to have 45 of the participants arrested and charged, with 22 jailed.

It’s an assimilationist legacy that Hanson and other elders want the Ka:'yu:'k't'h'/ Che:k'tles7et'h' First Nations to move beyond, towards a cultural revitalization. The focal point of this movement is the construction of a big house in Kyuquot that closely resembles one of those that once stood by the shore of Aktis Island.

“We need our culture to stand out again,” says Bill Oscar of the First Nation’s Legislative Ha’wiih. “If we had a big house in our territory we would have a place for people to learn who they are; a place where to get back into old ways, our old teachings which we don’t have anymore. A lot of them don’t even know who they are.”

Patsy Nicolaye recalls attending potlatches in her youth, when those who entered the longhouse were formally announced for all to hear.

“We never ran around, we just had to sit there. I can’t remember it being boring, just interesting watching them dance, some of them were so good at it,” says Nicolaye, remembering one particular dancer who captured her attention. “I saw him dance once, it was so fascinating. He could be on his toes, it looked like he was flying around. It used to look like he wasn’t even touching the floor.”

“I think that would be the most beautiful dream to have a longhouse again,” she reflects.

These elders are among the 10 or so Ka:'yu:'k't'h'/ Che:k'tles7et'h' members who fluently speak the First Nation’s ancestral language. To publicize the early stages of the community’s efforts towards its first big house in over 80 years, their accounts were filmed and presented on the website Kyuquotbighouse.com - spoken in English and the First Nation’s Nuu-chah-nulth dialect.

The initiative began in 2016 when a group of elders approached Russell Hanson, who is the First Nation’s forestry manager. As he drives up a hill to the future site of the big house on a crisp September morning, Hanson points to a line of children wearing their backpacks walking towards the Kyuquot community school.

“This is what it’s about right here,” he says, noting direction from the community’s elders that he carries each day as the project progresses. “They started talking about community needs, and what needs to be done to help children.”

The future site of the big house contains trees that were modified before 1847, making them historical relics of the Ka:'yu:'k't'h'/ Che:k'tles7et'h's ancestral practices. In a nod to the First Nation’s heritage, all of these trees are identified on maps as the development progresses, so that the big house can be built around them and not disturb the physical evidence of past harvesting practices.

Before modern forestry took over some trees were cut right at the level of the forest floor, others show signs of their trunks being hacked away through a combination of cutting and burning, while some have portions removed for cedar planks that were used for the walls of longhouses. Culturally modified trees have been found several kilometres inland in Kyuqot Sound, indicating the extent that the First Nation would go to in order to find the right cedar tree for a longhouse.

“They would dig test holes inside them and pound away until they got inside it and see if it was sound,” describes Hanson.

The forestry manger and his crew have already begun cutting trees for the big house, but are yet to find the main log that will extend across the middle of the ceiling. Following traditional building practices for northern Nuu-chah-ulth nations, this central cedar piece must meet certain dimensions to run down the length of the big house.

“The middle of the log has to be four feet in diameter, and it’s going to be between 60 and 100 feet long, depending on how well it survives on the fall,” explains Hanson. “Oct. 15-19 I’ll be sending two guys out with [BC Timber Sales] to mark and tag a few logs, and whichever one survives the best we’re going to take.”

Hanson explains that Ka:'yu:'k't'h' is a confederacy of families with four tyees, each of whom had designates below them tasked with being caretakers of the respective river systems in the region. Following direction to make the big house the cultural centrepiece of the community, beams going across the ceiling from the central log are planned to be carved identifying separate rivers and the families responsible for them.

“We’re trying to keep this as traditional as possible, with the exception of a little bit of lighting, the PA system…bathrooms,” he says.

In comparison to other modern-day big houses in Nuu-chah-nulth territory, those behind the Kyuquot project are emphasizing traditions in appearance and design. The project’s architect is Scott Kemp, whose experience includes the work on the Malahat Nation’s recently restored longhouse.

“The intent is to have it look exactly like a traditional big house, but perform more like a new building, so it’s got insulation and a mechanical system,” he says, noting that the building’s design came from gathering memories and input from sessions with the community. “We have quite extensive meetings where I bring a roll of sketch paper and pens, and I don’t talk, I just listen. As the community talks, I draw.”

With a dirt floor, cedar beams and planks, the big house is designed like a historical structure resembling those that burned on Aktis Island over 80 years ago. But the structure will also meet modern building codes, with a concrete foundation and plywood under the cedar planks to ensure stability in an earthquake, said Kemp, who notes that the traditional longhouses were structurally strong to begin with.

“They in themselves are quite a good structure - they’re quite robust from a seismic point of view,” he says. “Normally they were just board and baton stuck on, but what we will do is a proper framed wall with plywood, which creates a diaphragm, and that’s all hidden…it will look the same, but inside is a shear wall and insulation, that’s how we’re maintaining current codes but also having the appearance exactly like it was historically.”

With an estimated cost of $3.25 million, the big house project has received support from a group of anonymous donors from outside Kyuquot, but the community is actively seeking other funds. It’s part of a larger multi-million-dollar project to build an adjacent multi-use building that would house a full gymnasium, a library, kitchen as well as rooms for literacy, computers, elders and youth. The Rotary Club of Canada has initiated support for the multi-use building through their Write To Read program. This building would also be the community’s evacuation site in the event of a tsunami, providing more room than the school’s half-size gym that was used following a 7.9-magnitude earthquake struck off Alaska in January.

Due to its remote location with no road access, construction costs in Kyuquot can double in comparison to Vancouver Island’s more easily accessible towns and cities. In an effort to build community capacity, the big house project is not relying on a general contractor; instead a mostly local team is being assembled and trained to realize the project.

In September a crew of five was gathered to build the project’s carving shed, where logs and artwork will be made under a wind-resistant shelter in the middle of Kyuquot’s Houpsitas village. Equipped with a sawmill to cut logs harvested from Kyuquot Sound, the intent is for the carving shed to be used for other projects after the completion of the big house, says Project Manager Steve Lawrence.

“There’s a rail system so that we can load the logs and roll them out on wheels, or roll them in,” he explains. “One of the big objectives of the project is to build skills and facilities within the community so that they’re more self-reliant and resilient.”

Those behind the big house project hope this training could eventually help with Kyuquot’s housing shortage.

“After this building is done, we’re hoping the same team can go on and maybe do another renovation on a building in the community,” says Lawrence.

As the community moves ahead with these lofty projects, efforts to keep the songs of the ancestors alive are underway. For over a year a handful of drummers have gathered to perform traditional Ka:'yu:'k't'h'/ Che:k'tles7et'h' songs, including preparations for two potlatches to be held this fall. But with no facilities in Kyuquot to accommodate hundreds of people, the events will have to take place in Campbell River, explains Hanson.

Cultural material will need to be ready before the big house project’s expected completion in 2021.

“We have two years to prepare, it might seem like a long time but it’s not,” says Hanson. “We’ve got a lot of work to do, especially in bringing out all of the songs and dances that each respective chief has. There’s some that are lost – they’re out there, we just have to find the tapes to re-hear them, re-learn them.” 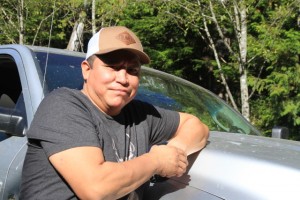 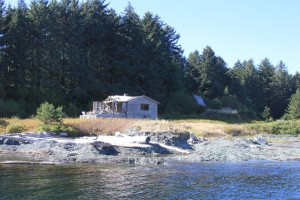 Thousands once lived on Aktis Island, where 24 longhouses were destroyed in the 1930s. 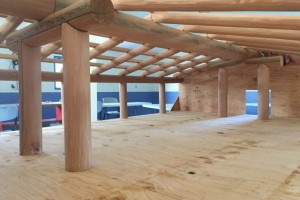 This model displays the dimensions of the traditional big house being built in Kyuquot. It currently hangs over the First Nation’s band office entrance. (Ka:’yu:’k’t’h’/ Che:k’tles7et’h’ First Nations photo) 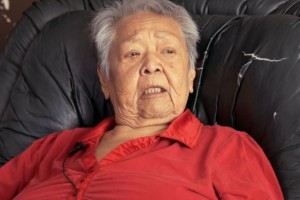 Patsy Nicolaye, pictured in a film documenting the early stages of the big house project, is among the elders who identified the need for the project. (Kyuquotbighouse.com video image)