Students from from across central Nuu-chah-nulth territory gathered in Tofino on Oct. 18 and 19 for an event focussing on how to keep the ancestral dialects alive. (Denise Titian photos)

Following elders’ guidance that a critical time has arrived to keep the Nuu-chah-nulth dialects alive, a two-day language gathering kicked off Oct. 18 at the Tin Wis Conference Centre, drawing in hundreds of people of all ages from the entire region. Hosted by the Coastal Family Resource Coalition, C~awaackʷiniš Gathering brought together both teachers and learners of the Nuu-chah-nulth language in its various dialects.

During an open microphone session at the event, Ditidaht elder Mike Thompson pointed out that he will be 80 very soon.

“Way back when I was 25 fluent elders were everywhere,” he said. “Language is fading and things are different now.”

Thompson told the people that when it comes to saving the language, time is of the essence. He reminded them that it costs nothing to speak the language to others.

This is the approach John Rampanen and his wife Nitanis have taken to be active language learners and Nuu-chah-nulth teachers within their family. They’ve developed language teaching games and have come up with strategies to speak the language among their family.

Their youngest son is five years old and they are raising him to be bilingual. Rampanen noted that the Nuu-chah-nulth language includes sounds that are foreign to the English speaking palate, creating a challenge for speakers to go back and forth between languages.

He said his son was referred to a speech pathologist at school because he has a Nuu-chah-nulth speaking palate and finds some English words hard to say. On the other hand, people learning Nuu-chah-nulth as a second language speak it with an English accent. But they don’t let that hold them back.

It takes a conscious effort to make these sounds that many of us are unaccustomed to, he added. Progress has been made.

“My kids speak (Nuu-chah-nulth) more naturally than I do,” said Rampanen.

The gathering was hosted by the Coastal Family Resource Coalition and was funded by Decoda Literacy Solutions, Ministry of Child and Family Development, and the Clayoquot Biosphere Trust. Brooke Wood is the literacy coordinator for the CFRC. She said the gathering came about through the work of the Language Revitalization Committee. The CFRC is a non-profit agency that works to develop the capacity on the West Coast to address community needs by improving communication between service providers, agencies, communities and funders.

Part of their work is to help facilitate community efforts to keep the Nuu-chah-nulth language alive. Woods says that the CFRC applied for federal funding for language programs. The money was divided up and distributed to the First Nations communities of the region: Ahousaht, Hesquiaht, Tla-o-qui-aht and Yucluthaht.

The Language Revitalization Committee knows that there are fluent speakers in the region and there are programs and teaching aids. They decided that by inviting everyone involved in Nuu-chah-nulth language learning or teaching to a gathering, people would have an opportunity to share ideas and come up with ways to continue to learn and celebrate the Nuu-chah-nulth language.

“We wanted to do something positive and fun with language,” said Woods. In their work with the local indigenous communities, the CFRC has identified 40 fluent speakers that are working on various language projects. “There’s lots going on,” she said.

Day one of the gathering focussed on the children and the various strategies being used to transfer the language to them. Student from all the schools in the region including Tofino, Ucluelet, Ahousaht and Hot Springs Cove were invited to demonstrate what they are learning in their classrooms.

The name of the gathering, c̓awaackʷiniš, means we are all one or we come from one. The theme for the event was histanuum, which means going towards the new generation.
According to the organizers, their goal is to bring together traditional knowledge holders including elders, advocates, youth and educators from around the Clayoquot Biosphere Region of Nuu-chah-nulth territory (Hesquiaht, Ahousaht, Tla-o-qui-aht, Yuułuʔiłʔatḥ, and Toquaht) to share stories and their journeys to Indigenous language revitalization.

The first day of c̓awaackʷiniš gathering was dedicated to youth and the language preservation efforts that they have been involved in. The centre was filled with school students from the region; language learners of all races.

Ucluelet Secondary School’s Timothy Masso was there to welcome the crowd using the Nuu-chah-nulth language. Tim is from Tla-o-qui-aht, a Grade 10 student who, while in the eighth grade began teaching Nuu-chah-nulth language to his peers when there was nobody else able to do it in the Indigenous Studies program.

He told the crowd that he was happy to see the youth getting up and speaking the language.

“Here we are – people of many dialects; we all know something and together we know lots,” said Masso, quoting linguist Adam Werle.

Hjalmer Wenstob, an artist, stood proudly next to his younger brother, saying that he too is happy that people are coming together to share knowledge. “Language is more than learning how to count to 10,” he said, noting that there’s a richness to language, and how subtle differences in words can change the meaning entirely. Wenstob said he continues to learn the language from his little brother Timmy.

The gathering featured keynote speakers, a panel of local Indigenous language speakers, guiding thoughts from our elders and youth presentations. Throughout the two days there were cultural performances by Nuu-chah-nulth nations and school groups.

There was a cultural performance by students of Wickaninnish Elementary School that featured girls doing a paddle dance while the boys sang in a drum circle. The performers were made up of all races; the lead singers being Mike Crosina from Tla-o-qui-aht and Liam Manmohan from Trinidad.

The afternoon was filled with activities for the kids with a lahal game being played outside, a fun game that involved counting in Nuu-chah-nulth on the beach and kids playing a large wooden drum that many of them had a hand in carving.

Ahousaht cultural leader Tim Sutherland noted that Ahousaht school children were not participating in the language gathering as planned. They were taking part in a search for missing Ahousaht man, Travis Thomas, at Bartlett Island. The Ahousaht Ha’wiih called upon all willing and able Ahousaht residents to join in the search that Oct. 18, including the school students.

Had they been at the gathering they likely would have performed songs and dances. Instead, Tim Sutherland invited people to join him in the singing of his song, Klecko Ha’wiih. The song is about showing gratitude to the Creator.

“We suffer, we struggle, but we must always remember that we have something to be grateful for,” said Sutherland.

Members of the c̓awaackʷiniš planning committee took time to blanket local language champions. These are elders and fluent speakers as well as teachers actively sharing the language.

“Each and every one of you helps us so much on our journey; helped us to feel connected to our land and our language. Klecko, klecko!” said Timmy Masso.

The second day of the gathering was all about the adults and what they thought should be done to grow the pool of fluent Nuu-chah-nulth speakers.

Tla-o-qui-aht elder Levi Martin spoke of the Nuu-chah-nulth teachings of taking great care of and having respect for our environment.

“The ground we walk on is made of the dust of our ancestors so you walk gently and with respect,” he said. The ancestors, he said, had a great understanding of the cycle of life and respect for the flora, fauna, air and water.

As part of his work in language preservation, Martin joined a group for a language activity held at Hesquiaht Harbour. “There was no running water, no electricity, no cell phones; it was the best time I’ve had!” he said.

During that session, Martin said the group talked about ways to accommodate the teaching of the language. One idea they spoke of was the hosting of a potlatch where the English language would not be spoken. It will be a language immersion exercise where people will speak only Nuu-chah-nulth.

An organizing committee was struck and they plan to hold the language immersion potlatch in 2019. Details will emerge as planning is carried out and announcements will be made at a later date.

The gathering also included a panel discussion made up of language teachers who talked about the challenges they face in terms of funding and restrictions attached by some funding agencies. Teaching language programs to children in an institutional setting like school or daycare, for example, requires that instructors be vetted for the safety of the children. One male teacher said he felt like people were looking at him as a pedophile because of it. But he understands why it is necessary.

Some schools require language instructors to have teaching certificates, which requires several years of university study. With the language at risk of extinction, there is no time to wait for teachers to earn university degrees.

Ucluelet elder Bernice Touchie suggested people host private language nests in their homes. A language nest is space where fluent speakers get together not only with children, but also other family members to learn the language immersion-style. The language learners hear the language in conversation form, picking up the ‘flow’ of conversational Nuu-chah-nulth.

Those involved in language revitalization believe that language nests provide work best when the whole family can participate, thereby creating opportunity for the family to continue with language practice and reinforcement in the home.
Another benefit of immersion-style language teaching is children pick up they what they are hearing quickly. Joshua Shaw teaches language to children in Port Alberni and says it’s hard to be language learner and teacher at the same time. “But it’s spiritually uplifting, because with children, there is no judging,” said Shaw.

The CFRS will continue to fund established community language nests for one more year, until the funding runs out. They also plan to seek out funding to carry on projects and host future events.

“We hope to do this again,” said Brooke, adding that it would be great if there could be a kid’s language festival every year.

“2019 is the UNESCO year of Indigenous Languages,” said Brooke. For that reason, she is hopeful that they will be successful in finding support for language programs in the coming year. 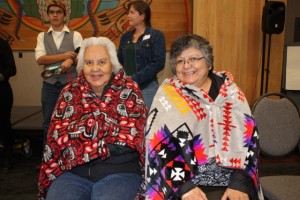 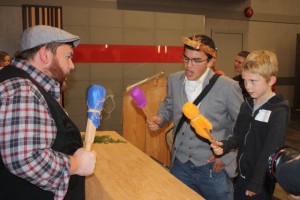 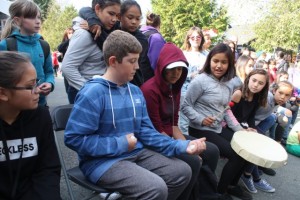 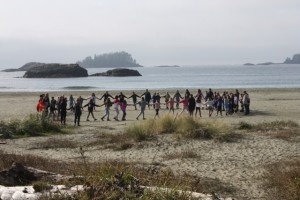 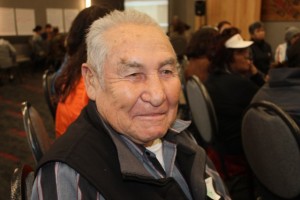 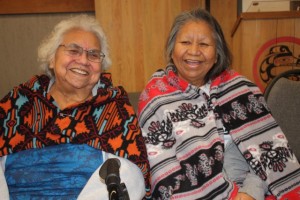