This totem pole composed of two-by-fours is one example of Hjalmer Wenstob's novel approach to presenting traditional Nuu-chah-nulth art. The Tla-o-qui-aht carver was awarded by the Hnatyshyn Foundation in Ottawa this fall. (Submitted photos)

Hjalmer Wenstob, a young artist from Tla-o-qui-aht, was among three Canadians selected to receive the William and Meredith Saunderson $5,000 award during the Hnatyshyn Foundation Award reception held in Ottawa on Sept. 12.

Wenstob is an interdisciplinary artist and holder of an undergraduate and master’s degree at the University of Victoria. He specializes in carving and owns, along with his family, the Cedar House Gallery in Ucluelet.

He said he believes it was his contemporary take on traditional art that drew the attention of the Hnatyshyn Foundation.

“I made a totem pole out of two-by-fours as a way to draw attention to deforestation and the lack of old growth cedar,” said Wenstob. In addition, he transformed a Styrofoam cooler into a traditional bentwood box as a political statement.

“These are contemporary stories of how we’re treating the environment,” said Wenstob.

The Hnatyshyn Foundation is a private charity established by the late Right Honourable Ramon John Hnatyshyn, Canada’s twenty-fourth Governor General, to assist emerging and established artists in all disciplines with their schooling, training and career development - and to promote the importance of the arts in Canadian society.

Wenstob is from the Masso family of Tla-o-qui-aht on his father’s side and is Norwegian/English on his mother’ side.

“His work, at times is highly political, and uses humour and irony to pose difficult questions of respect, reconciliation, and environmental issues,” reads a statement from the Hnatyshyn Foundation.

“We are very proud of these talented artists and grateful to our donors William and Meredith Saunderson and to TD Bank Group for making the awards for emerging artists and curators possible. It is with their generous support that we are able to continue our mission of enriching the legacy of art in Canada for the benefit of all Canadians,” said Mrs. Hnatyshyn.

The Masso/Wenstob family traveled to Ottawa to be with Wenstob as he received his award.

Wenstob now focusses his attention on the family-owned Cedar House Gallery in Ucluelet where he supports other aspiring artists.

He said it is such an honour to be recognized on a national stage with two other emerging artists. Besides mentoring artists in his gallery, Wenstob teaches Indigenous Art at Camosun College in Victoria. 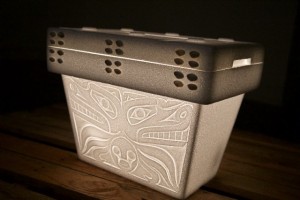 Wenstob transformed a Styrofoam cooler into a traditional bentwood box as a political statement. 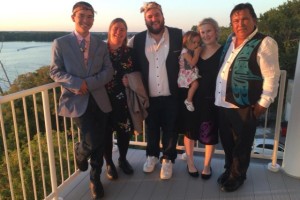