Cermaq employees fill up water tanks to be sent to Ahousant on Nov. 7. The water was supplied by a fire hydrant in Tofino. (Cermaq photo)

The term bird bath has come to mean something new in Ahousaht as hundreds of people enter day three of severe water restrictions after muddy debris tainted the community water reservoir.

Maxine Thomas missed an opportunity to take a trip to Tofino’s Fourth Street dock where the shower facilities were made available to the people of Ahousaht.

“My daughter wasn’t awake yet so I’ll just let her have a bird bath this evening,” said Thomas.

“The water shortage isn’t too bad,” said mother of six children, June Titian. “It's annoying not being able to shower or do laundry, but luckily I was able to catch up on the weekend before the restrictions started.”

She says the generous donations of water to the community are greatly appreciated.

“I got two big five-gallon jugs plus my dad got four gallons for us; I put a few totes out to collect rainwater and I'm using that to fill the bathtubs. I use the bathwater to flush the toilets,” she said.

Another mother carefully rations out their limited supply of water. Some is set aside for boiling smoked fish and potatoes and some for coffee. People share ideas on what meals can be made without water.

By day three of water restrictions, more and more people are missing the luxury of having a shower, as much of the able-bodied volunteers work tirelessly into the night to offload donated water from boats and barges. After three days of hard work, laundry baskets are filling with sweaty, muddy clothes, and there is no end in sight.

The problem started Sunday, Nov. 4 when someone discovered that the village water reservoir was filled with muddy, brown water with particulate levels so high that it put a strain on the filtration system.

According to a tweet issued by Ahousaht Maaqtusiis on Sunday, Nov. 4, “Ahousaht is under boil water advisory after mystery soil contaminants entered village reservoir early today or late last night.”

In a Facebook message issued later that day to the community, Ahousaht Emergency Services Coordinator Michael Swan stated further that water levels in the holding tanks were dangerously low. There is not enough water to handle emergencies like a house fire.

Tofino’s Emergency Program Coordinator Keith Orchiston said he was directed by the provincial government to activate Emergency Social Services, as 50 Ahousaht residents arrived in Tofino Monday night after being evacuated from the village. They were elders, bottle-fed infants and the infirm.

“We met them down the dock when they arrived but it was cold, so we registered them at a facility out at Tin Wis Resort, where they will be staying,” said Orchiston.

Records of who is receiving assistance are being collected for Emergency Services BC, for the purpose of reimbursement to the band later.

To help Ahousaht residents clean themselves, the Tofino Harbour Authority is providing access to two showers, two washrooms, as well as a laundry and dryer machine.

The Tofino Volunteer Fire Department were called upon to pump water from a fire hydrant to fill massive water containers provided by Cermaq Canada. On Monday night 12,000-15,000 gallons of water was sent to Ahousaht via barge. Once there the Ahousaht Volunteer Fire Department pumped the water from the tanks into their fire truck, which in turn, was emptied in Ahousaht’s water tanks.

Both the elementary and high schools have been closed for the duration of the water crisis.

On Wednesday, Nov. 7, a second barge carrying up to 15,000 gallons of bulk water and more donated bottled water left Cermaq Canada’s facilities in Tofino for Ahousaht.

Then in her Wednesday morning update to the community, Ahousaht’s Emergency Services spokesperson Anne Atleo said the state of emergency remains in effect. Residents are being asked not to bathe or do laundry as water restrictions are in effect until further notice.

She noted that the water levels in the holding tanks are slowly rising but the community must continue to obey water restrictions. 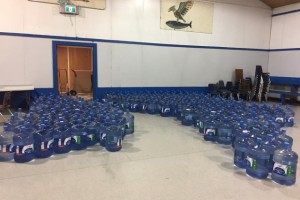 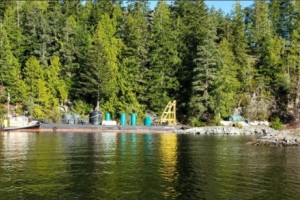 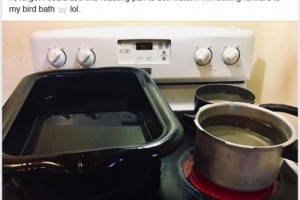