Heavy rain on Nov. 4 gave Ahousaht's water dam a muddy appearance, which led the community to shut off its suply for four days this week. (Rod Sam photo)

With a long, dry summer one would think autumn’s first big rainfall would be a welcome relief, but in Ahousaht, the early November rainstorm brought muddy nightmares.

The problem started Sunday, Nov. 4 when an Ahousaht water plant employee received warnings on his smart phone that there was something wrong at the water treatment plant. The turbidity levels were off the chart and they later discovered that the water in the dam was a milky brown color.

The particulate levels were so high that it put a strain on the filtration system. The water treatment plant was unable to put out enough clean water to keep up with community demand.

According to a tweet issued by Ahousaht Maaqtusiis on Sunday, Nov. 4, “Ahousaht is under boil water advisory after mystery soil contaminants entered village reservoir early today or late last night.”

Water treatment plant employees set out to inspect the entire water system and made two discoveries: the water in the dam was muddy and a previous water main repair developed a bad leak.

Water Plant Supervisor Rod Sam said he went up in a helicopter to survey the dam and surrounding area and noted there were no landslides. However, there was a heavy downpour of rain in the region on Nov. 3.

It is believed that the heavy rain coupled with a drier than normal summer caused soil from the edges of the pond to enter the water. The muddy water then flowed to Ahousaht’s water treatment plant, overwhelming the filtration system.

Sam said the water treatment plant can handle turbidity levels of 50. On Sunday, Nov. 4, the levels were at 79.8.

“When the water is not going anywhere we have to shut it down,” said Sam.

Clogged filters coupled with a leak in the water line put a strain on the treatment plant. With community water consumption higher than the rate of water purification, leadership was forced to shut the system down.

Sam said the water reservoirs need to be at 60 per cent for fire protection needs; but they fell to 34 per cent on Nov. 4.

“We had to make the decision to kill the filters so that we can scrape them,” said Sam. One team repaired the leaky water line while another team scraped the filter.

Sam said that a filter is about the size of a large classroom. With 15 men scraping the soft mud that had accumulated on the screen, it took less than half an hour to clean the filter. But the entire process of shutting down and restarting the plant takes hours.

For that reason, Sam said having a third filter would help.

Chief Councillor Greg Louie said they are working on a new wastewater plant but not a new water system. He says they are talking to the federal government about options to improve the existing water system.

In 2016, Ahousaht faced community water problems when a water main broke. It took days to fix the line.

“We’ve talked to the feds about installing a redundancy line – the current water line runs from the dam, underwater to the water plant; we’d like to have another one installed over land,” Louie said.

A second option, he said, would be the installation of a secondary filtration system or putting in more large water storage tanks.

“Rain caused the turbidity – Tofino had the same problem but they had a quicker turnaround time,” said Councillor Tom Campbell.

He speculated that it may be because they have more filters. 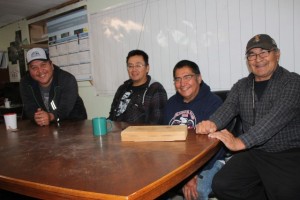