For the second year running, Angeline Althea brought together family, friends and community in the spirit of the game and a clear determination to do something about suicide. (Mike Youds photos)

As Maaqtusiis Suns and Ahousaht Thunder tangled for domination on the basketball court, Angeline Althea had one eye on the roster, another on posters with messages like “Ya?akuks Suutit” — We Love You.

For the second year running, Althea brought together family, friends and community in the spirit of the game and a clear determination to do something about suicide.

“We intend to do it every year,” she said as the second annual Suicide Awareness Open Basketball Tournament got underway at Alberni Athletic Hall Nov. 16-18. “This year I connected with Tsow-Tun Le Lumb in Parksville, where I went to trauma workshops.”

Tsow-Tun Le Lumb, which means “helping house,” is a substance abuse and trauma treatment centre near Parksville that incorporates traditional healing practices such as brushing and cleansing. The centre provided healing services upstairs at the hall during this year’s tournament in Port Alberni, support that has shown clear results for people suffering from depression and suicidal thoughts.

A 2017 report by the B.C. Coroner made broad recommendations for addressing disproportionately high suicide rates among Indigenous youth. Prominent among those was a call to assure greater access to programs and services, reducing barriers and building stronger connections to family.

"In all cases, we have found that involvement in community cultural activities can save lives by restoring pride, self-worth, a sense of purpose and overall health and wellness," the panel report concluded.

Althea attests to the effectiveness of those approaches based on her own experiences.

“It really helped me when I was going through things,” she said.

Two years ago, her family lost their grandfather through suicide. “Johnny O,” as he was known, was a former Ahousaht chief, well connected, respected and loved. Angeline was close to her grandfather and losing him sent her into a deep, dark depression that took time and dedicated effort to overcome.

“We were really close. He was like the glue to my family,” she said. “It changed my aspect of thinking. I would get depressed all the time.”

“He would really love something like this,” added Althea, smiling. “Our whole family had a hard time losing him. It hurt for a long time; it still hurts … I had suicidal thoughts. It was really hard for me to come out of. That’s what inspired me to do this.”

Simply knowing that there is help available is a critical first step. Sharing feelings with loved ones is also essential.

“You don’t know how many people love you,” she said, expressing the words that she took to heart on her own emotional journey. “I let it all go, though, all my sorrow and pain. I didn’t let them control me anymore.”

The journey has been life altering for the young university student to a degree where she is pondering a future of reaching out and helping people, whatever form that might take. She took a break from criminology studies at VIU in Nanaimo as she decides her next step. She’s already accomplishing that with the tournaments.

“I had a lot of help,” Althea said, acknowledging support from an immediate family that numbers about 50. “I don’t play basketball, but it’s a really good way to involve elders and teens and babies, a really good way to bring people together.
The main message is a healing one: ‘I just want people to know they’re not alone’.”

“If two years ago you told me I would be organizing a basketball tournament like this, I would have said you’re crazy,” she admitted. 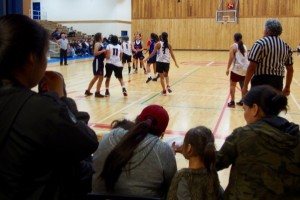 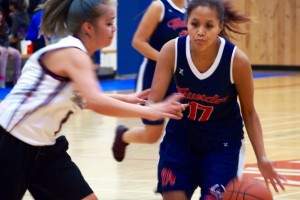 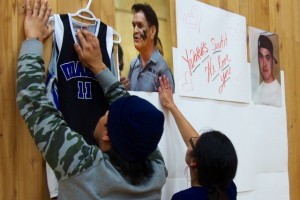