Alexandra Adrian holds the recently discovered purse of her late mother nearly 40 years after it was left within a hotel wall. (Submitted photo)

Renovations at Tofino’s Maq Hotel (formerly Maquinna Hotel and Maquinna Lodge) has led to the discovery of a veritable time capsule. A purse loaded with the belongings of a then 15-year-old Ahousaht woman was found entombed in a wall.

Contractor Garth Cameron said his employees found the purse encased inside an interior wall of the ballroom/cabaret on the second floor of the hotel. He said it was clear that the purse was deliberately placed there because it was within the space of an interior wall and dry walled over.

With all the news about missing and murdered Aboriginal women, the workers decided the best thing to do was turn over their suspicious-looking find to the RCMP.

Identifying information found in the purse revealed that it belonged to Rubina Charleson, who, by all indications, lost the purse in June 1979.

The purse was discovered Nov. 3. Based on identification found in the purse, the RCMP contacted Ahousaht Administration in an effort to track down the owner. Eventually, relatives of Charleson were located.

Sadly, Rubina, known by friends and family as Ruby Charleson, died in 1998 at the age of 34. She left behind three daughters; they live in Alberta and Saskatchewan with the eldest living in Victoria, B.C. Alexandra Adrian, the eldest daughter, made the trip to Tofino on Nov. 17 to retrieve the purse. She was joined by her cousin and her aunt Bettina, Ruby’s sister.

“My first thoughts, when I heard about my mother’s purse was to leave Victoria for Tofino, pick up the item myself possibly; pick my aunty Bettina in Nanaimo on the way,” said Adrian. She didn’t care that it was late in the day. “It took my all to stay put and figure out some plans with the family.”

Adrian has good reason to feel anxious about collecting her mother’s purse as quickly as possible. A year after her mother died Alexandra was given her mother’s wrist watch, which was broken. She brought it in for repairs and when she enquired about it sometime later she received devastating news.

“After sometime we didn’t receive it back we called them up and they said, ‘Oh, it was broken so we threw it out’,” Adrian told Ha-Shilth-Sa. “I now had nothing of my mother so when this purse turned up it was a huge deal.”

The dark coloured purse with metal handles was in perfect condition, albeit soiled from sheet rock dust. Inside were the treasured belongings of the 15 year old from 40 years ago.

There was a pair of spike-heeled dress shoes with one broken heel, a hair brush, some blush and lip gloss, a folder of black and white family photos, personal identification, a Ha-Shilth-Sa newspaper clipping and a bottle of stale Miss Dior perfume (now considered vintage).

Days after picking up the purse, Adrian was still emotional, telling Ha-Shilth-Sa it was a lot for her to take in. Her cousin Alicia Stephens, who was among the family members that picked up the purse, said it was an emotional moment when they laid eyes on it.

“For some it was like opening up old pain, but for me it was like being close to her again, feeling her spirit, it made me really happy,” said Stephens.

Stephens said that her cousin was very young when her mother passed away and she never really knew her, so the purse is a special treasure for the family. Adrian concurred.

“I didn’t know what to feel. Sad...happy.... excited...nervous, I just knew I had to get this fast; I did not want it to be one of those things where it ‘got lost’,” she said. “The items may be things a normal person would throw out.”

But she is going to keep it to share with her sisters. She hopes to get enough money together to make a trip to Alberta and Saskatchewan to share the purse with them, hopefully by her mother’s birthday in January.

Stephens suggested it would be a good idea to have a display case made to preserve the purse.

After the family spent time looking over the items in the purse, they went to pay respects to Ruby’s memory.

“We came together as a chance to feel her spirit again and went to visit her at Rafael Point, near Tofino, were her ashes were spread in the ocean,” said Stephens.

“Having these items is the perfect gift and to share with my sisters forever; it is amazing,” said Adrian. 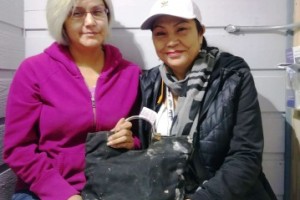 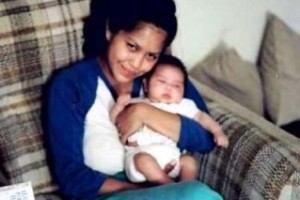 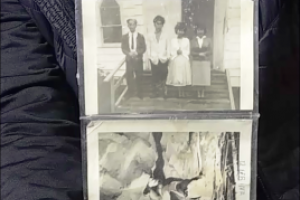 Old family photographs were among the purse's contents. 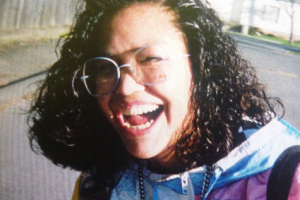