Haahuupayak students perform Kwiikaaltha, a victory song, on Dec.10 at the Trinity Church before a meal for the Port Alberni community. (Eric Plummer photos)

It appears organizers will need a larger venue in 2019, after this year’s Feeding the People lunch packed the Trinity Church’s dining hall with wall-to-wall visitors eager for a hot meal.

Nearly 140 people came to the annual Christmas lunch on Dec. 10 in Port Alberni, which was put on by the Nuu-chah-nulth Tribal Council’s Teechuktl Mental Health department and open to anyone in the surrounding community.

As Teechuktl staff feverishly prepared food in the kitchen for the crowd of hungry diners, CHS Training Coordinator Stan Matthew reflected on how the event’s attendance has progressively grown since it began in the Bread of Life soup kitchen on 3rd Avenue eight years ago. Feeding the People was started by the late Tla-o-quiaht Ha’wilth Ray Seitcher.

Despite receiving more diners than expected, Matthews was happy with the hectic, yet joyous occasion.

“It always works out really well,” said Matthew, who had two turkeys cooking in his kitchen on the morning of the event. “Everything is donated, nothing is bought. Everybody chips in donating turkeys, potatoes, vegetables, chumus.”

As the event has progressively outgrown its previous venues, Matthew credits Feeding the People’s popularity to word spreading around the Alberni Valley and the rising prevalence of homelessness-related issues.

Over 20 per cent of Alberni Valley residents live in poverty, according to Statistics Canada, compared to 15.5 per cent of British Columbians who live below the standard. The Alberni Valley Vital Signs report for 2018 cites a living wage of $17.56 for a family with two working parents to cover basic expenses - a 34-cent increase since 2015 that is higher than the Comox Valley’s living wage of $16.59.

Half of the community’s renters spend more than 30 per cent of their income on housing. While the Alberni Valley remains the most affordable community on Vancouver Island to buy a home, the benchmark price rose by $100,000 since 2015 to $294,900, according to the Vancouver Island Real Estate Board.

After Alberni’s last Homeless Count in April identified 147 individuals without housing, this year’s Vital Sign’s report highlighted a growing concern in the valley.

“Housing has emerged as a critical issue, with house prices rising quickly and half of renters paying so much for hosing that they are at risk of homelessness,” stated the report, which was compiled by the Alberni Valley Community Foundation.

This year Grade 5 and 6 students at Haahuupayak Elementary focused on this growing social concern as they developed a project to contribute to their surrounding community. What resulted was a large-scale collection of donated clothing that was piled along one side of the dining hall during the Feeding the People event. This included $679 worth of winter wear that the students purchased through the proceeds of a bake sale.

Nancy Logan, a Grade 5 teacher at Haahuupayak, said the initiative germinated from classroom discussions over how basic human rights have been recognized since the Second World War.

“We looked at human rights, the rights of the child and how food and shelter are some of the basic rights and how that’s being met in the community,” she said.

“We started talking about the problem in the community,” added Grade 6 teacher Helen Lucas. “They came up with the idea of buying socks, scarves and toques.”

Logan noted that the issue was relatable to many at the school, as some students commented that their parents had struggled with homelessness. The students’ handiwork was also visible at the Dec. 10 event as some ladies wore handcrafted cedar boughs and roses, and they gave spirited performances of the Tseshaht Dinner Song and Kwii Kaaltha (Victory Song) before the meal was served.

“It’s our traditional ways; the community takes care of their own,” said Logan. “It’s not somebody else’s problem - it’s our concerns and responsibilities.”

“It feels good to help people because when they smile you can smile back,” wrote Mary, a student at the school in a classroom assignment given to reflect on the initiative. 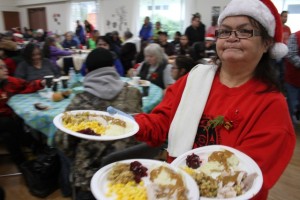 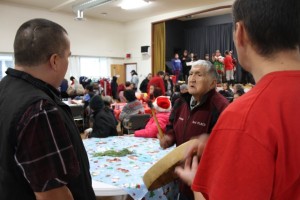 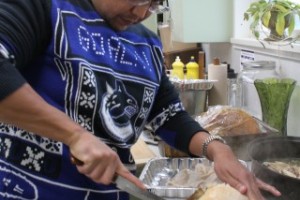