The storm that hit Vancouver Island this week has caused violent waves on the west coast, as pictured in Hesquiaht Harbour. (Karen Charleson photo)

The storm warning issued by Environment Canada has delivered on its predicted damaging effects on much of Vancouver Island.

The high winds began slamming the coast early Thursday morning causing BC Ferry cancellations of all sailings between Vancouver Island and the mainland for at least the morning.

“Environment Canada has issued several wind warnings predicting heavy sustained winds on Thursday, Dec. 20 from mid-morning into the evening for much of the B.C. coastline. ​This has resulted in sailing cancellations,” says the BC Ferries website.

BC Ferries will issue an update on ferry services after 12:30 p.m. today.

The BC Hydro outage map for Vancouver Island is lit up like a Christmas tree with 40 reported outages affecting 32,674 customers.

In addition, high winds and pooling water between Fourth Street and Highway 4 at the Tofino-Ucluelet junction for 32.3 kilometres was reported.

Long sections of highway around Parksville are filling with rain water. Drive BC reports water pooling in a section of Highway 19 for 28 kilometres between Cumberland and Parksville. In addition, Highway 4A near Highway 19A (toward Parksville) has pooling water.

Environment Canada says a wind warning remains in effect for coastal Vancouver Island for the rest of the day. The forecast for today calls for rain; wind northwest 80 kilometres an hour gusting to 100.

Tonight will be mainly cloudy with 40 per cent chance of showers; wind northwest 60 kilometres an hour gusting to 80 diminishing to 30, gusting to 50 late this evening. 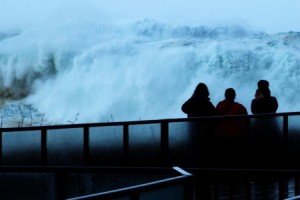 The storm brought spectacular waves to be seen from Black Rock Resort in Ucluelet, creating large deposits of sea foam along the shore. (Curt McLeod photos) 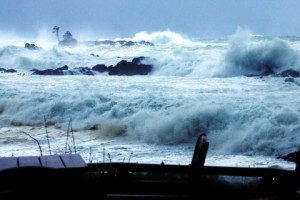 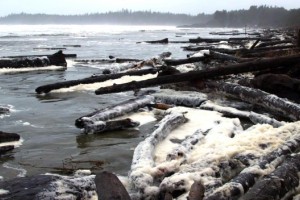