"Human food kills wildlife" is part of the messaging being put out by Parks Canada now in the Pacific Rim National Park Reserve. (Parks Canada photo)

Parks Canada officials have been installing signs around the Pacific Rim National Park Reserve recently to educate the public how to better co-exist with wolves and other wildlife.

Todd Windle, the project manager for Parks Canada’s Wild About Wolves Project, said there is a significant need to increase awareness about how to properly live with wildlife present.

“We’re just not cleaning up after ourselves,” he said. “We can’t let them access the human food, intentionally or indirectly.”

The awareness campaign is partly aimed at park visitors that do not properly dispose of their food. Officials are hoping the signs will better educate them that such actions end up attracting wildlife.

The goal is to ensure both park visitors and wildlife remain safe. To better educate the public about wildlife interactions, awareness signs started popping up around the Pacific Rim National Park Reserve in November.

“Over-all interactions between people and wolves are increasing in the region and not just in the park,” said Windle, who works out of his office in Ucluelet.

Though officials believe the number of times humans and wildlife cross paths during potentially dangerous situations is on an upswing, Windle said it is difficult to say how many times this happens.

“It’s a tricky one to keep good stats on,” he said. “Not all incidents are reported to us.”

Officials managed to erect about a half dozen signs in November and December before some inclement weather set in. The signs are just under six feet tall (two metres) and a little less than three feet (one metre) wide.

A billboard-size sign, measuring nine feet (three metres) high by almost 18 feet (six metres) wide, is also expected to soon be up. That massive sign will be at the south entrance of the park’s Long Beach Unit.

The Pacific Rim National Park Reserve, which covers 511 square kilometres in British Columbia, has three regions. The Long Beach Unit, which is 212 square kilometres, is located along Highway 4 between Tofino and Ucluelet.

The park’s two other regions are the West Coast Trail and the Broken Group Islands.
Originally, officials had hoped to put up the billboard sign in late December.

“It wouldn’t have been safe to put it up because of significant winds and rain,” Windle said, adding the goal was to install the sign at some point in early January.

The billboard sign simply features a wolf with a water bottle in its mouth and the words Human food kills wildlife, in both English and French.

“It’s quite striking and its purpose is to show how unnatural it is to have a wolf with a water bottle in its mouth,” Windle said.

Meanwhile, as for all of the other smaller signs, they not only have a picture of a wolf but also pics of a bear and a cougar.

The top of each sign has the heading ‘Living with wildlife’. And just below that is the message that human actions could change an animal’s life. Signs also include the following tips and advice: human food kills wildlife, give wildlife space, keep dogs on leash, keep children close and carry bear spray.

“Keeping your dog on leash is absolutely key,” he said. “People maybe don’t think about it. But their pets are an easy source of food.”

Meanwhile, the bottom portion of each sign includes information on what to do if wildlife approaches. If people find themselves in such a situation the signs suggest they should act big, make noise and don’t run. Signs also provide a wildlife reporting number for the park (250) 726-3604 as well as the Park Canada website for those seeking more information www.parkscanada.gc.ca/pacificrim-wildlife. 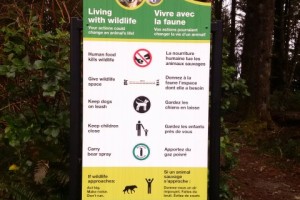 By the end of the winter Parks Canada plans to erect 22 signs warning visitors of conflict with wildlife in the Pacific Rim National Park. (Parks Canada photo)