The north side of MacMillan Park is closed until March for facility upgrades. (Mike Youds photos)

Cathedral Grove’s cherished old-growth forest sustained significant losses in December’s major windstorm, though recent closure of part of the grove is not related to the damage.

The ancient stand has probably seen many such storms yet the condition of the trees at this stage in its life points to the inevitable end of its biological cycle.

“The only thing they’re doing is upgrading the various facilities and the trails on the Cameron Lake side,” said David Karn, a spokesman with the Ministry of Environment and Climate Change.

The southern portion of the park, the big-tree side, remains open. The north side or lake side is expected to reopen to the public in mid-March once facility upgrades are completed.

Debris cleanup will have to be done in conjunction with the upgrading after the Dec. 20 storm left debris throughout the 300-hectare park and along Hwy. 4. MacMillan was one of several provincial parks in the middle and southern Island that took the brunt of damage in the coastwide gale. Little Qualicum Falls and Englishman River had to be closed entirely.

The good news for the grove, confirmed by a hazard-tree assessor, is that none of the oldest or largest trees were lost. The bad news? A total of 193 trees were felled by the storm, 55 of them snapping from stem failure and another 138 failing at the root. Six others have been marked as hazard trees and will require cutting and moving within the protected ecosystem. The trees will be left to naturally decay, contributing to the habitat needs of old-growth species.

Those who know the grove well suggest the damage is consistent with a forest that is reaching the end of its normal life cycle, about 800 years, the approximate age of the oldest trees surviving in the park.

Sandy McRuer, a retired Port Alberni forester, noted that the grove is no longer as impressive as it was in its prime, though it continues to attract about half a million visitors each year.

“That stand is getting decrepit,” he said, suggesting that B.C. Parks may want to alter its messaging to reflect that degraded status. He pointed out that there are other examples of old growth in the Alberni Valley, such as Colossal Grove along the upper Stamp River. None of the other sites is as readily accessible as MacMillan Park, though, which presents an awe-inspiring sight for tourists, many of whom have not seen trees of that scale before.

There remain a number of culturally modified Aboriginal heritage trees in the grove. With part of their bark peeled off, these ancient cedars serve as testament to a time when the grove was used for ceremonial purposes and gathering materials.

The park itself was established in 1947 after timber magnate H.R. MacMillan, facing considerable pressure from the Vancouver Island Tourism Association, gave it to the public. By then, the grove had been a popular stop on the road to Port Alberni for decades.

A study currently underway by the Ministry of Transportation and Infrastructure is intended to manage issues related to high traffic volume and pedestrian safety. Roughly 11,000 vehicles drive through the park daily, about twice the number of 30 years ago.

Last fall, the ministry held two open houses and an online questionnaire inviting public input on highway safety and parking improvements. An engagement summary report is scheduled for release this spring that may point to possible changes.

The provincial government will want to tread lightly if major alterations are contemplated. A similar plan was halted in its tracks in 2004 after a protest by a coalition of environmental groups.

Cathedral Grove lies at the edge of Nuu-chah-nulth territory, and the increasing scarcity of old growth in general has become a serious NTC concern. In November, the NTC executive called on the government to work with them to slow and possibly halt rapid loss of old-growth forests in Nuu-chah-nulth territory. Ancient trees on the Island continue to be logged with full knowledge of the province.

“Old-growth forests are invaluable ecosystems that can never be reproduced,” said Andy Callicum, NTC vice-president. “The forests play an important role in protecting wildlife throughout the winter, and for providing Nuu-chah-nulth peoples the medicines and roots contained within them.” 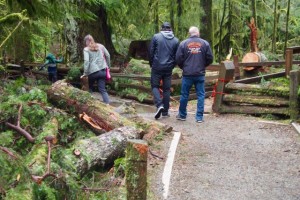