One of the largest lakes in Nuu-chah-nulth territory now has improved wireless service with the recent installation of a cellular tower.

At the end of December Rogers Communications activated the new cell tower on Sproat Lake, which is visible at night with a red beacon that can be seen from high elevations in Port Alberni. Located by Faber Road at the southeast section of the lake, the cell tower provides service that was previously nonexistent for much of the area.

“No longer will Sproat Lake residents have to travel down the road to get cellular coverage,” said Penny Cote, the Alberni-Clayoquot Regional District’s director for the Sproat Lake electoral area. “This new tower will provide cell coverage for approximately 2,000 permanent residents at Sproat Lake, and more than double that in the summer months.”

The announcement was made on Jan. 23 at the main ACRD administrative office in Port Alberni, where representatives from Rogers Communications came from Vancouver to speak about the development.

“For the first time on Sproat Lake, our customers can enjoy high-speed wireless coverage via a 4G LTE network, and this includes voice, text and data,” said Rick Sellers, Rogers Communications B.C. president. “For emergency personnel this new coverage will help us effectively respond to all incidents. Being connected will increase economic opportunities and also support local businesses.”

For years Cote and the regional district have been pushing for better cellular service on the lake, and back in June of 2015 the ACRD formally passed a resolution to issue a letter of land use concurrence to allow the construction of a tower.

“We had an accident last year where there were injuries and we had to drive a long ways to get to anywhere where they had cellar coverage,” said Cote. “The Sproat Lake Fire Department, first responders, search and rescue, 911, Sproat Lake Marine Patrol, foresters, boaters, hikers and recreational users of all types will benefit from this new service.”

This investment from Rogers Communications follows the construction of a cell tower on a stretch of Highway 16 in northern B.C., serving the Witset First Nation.

“That was obviously important because they didn’t have any coverage at all,” said Sellers, adding that the company continues to look at potential service tower locations if the economics are viable. “Where it makes sense from both sides, we’ll make sure that we do work with the provincial government when they’ve identified a need and a requirement. If it makes sense from our perspective, then we’ll certainly help them where we can.”

Cote added that the new cell tower complements the ongoing development of the Alberni Valley Regional Airport, which is located just north of Sproat Lake. With an expanded runway from over $6 million in investment, the airport can now receive larger aircraft.

“This investment from Rogers Communications is another asset for us which will greatly benefit this community, opening up economic development opportunities by linking Sproat Lake into the cellular world,” said Cote.

The new tower will not provide cell service for all of Sproat Lake, just the majority of the east side where most people live and use the lake. Travellers heading to the west coast on Highway 4 will still encounter a gap in cell reception at the farther reaches of Sproat Lake until the vicinity of Long Beach. 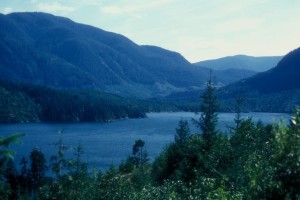