The 16-week program, formed through a partnership between NIC and the Tla-o-qui-aht First Nation, was taught on the Ty-Histanis reserve, where the nation retrofitted their public work space into a classroom and shop facility.

“North Island College came into community, we actually pulled in our utility cargo van, we pulled in all the shop tools and started the first phase of the carpentry pathways program which was a three-phase program,” said Lynne MacFadgen, NIC regional director, continuing education and training.

“There was some cultural elements interwoven in the training that created the integrity to the program,” MacFadgen said.

During phase one, students built a shed that sits near the reserve’s daycare site.

“It’s the most beautiful shed I’ve ever seen, it’s become a legacy project on the daycare site,” MacFadgen said. “It’s been nicely finished with cedar and one of the students, Seymour Seitcher, did a beautiful carving on the front, a whale carving. They custom designed the doors so it would fit with the overall structure.”

The carpentry apprenticeship level one program was funded by the Ministry of Advanced Education, Skills and Training and the Aboriginal Community-Based Training Partnership Program.

MacFadgen said the “successful partnership” between NIC and the Tla-o-qui-aht helps to address community needs without displacing people from their natural support systems and while fostering an understanding of the workforce needs.

Iris Frank, Tla-o-qui-aht education manager, said this is the first time the carpentry level one course has been brought to Vancouver Island’s west coast.

“By beginning this program, [students] can work towards becoming a certified carpenter for the west coast,” Frank said.

She said the program can help the Tla-o-qui-aht community by having a pool of skilled carpenters available to the nation when opportunities arise.

According to the Clayoquot Sound Biosphere Region’s 2018 Vital Signs report, residential housing is growing in the region, but construction may not be meeting the high demand.

“We, as well as other nations local to us, have building happening in our communities that require skilled carpenters,” Frank said. “Even if they are just beginning, working with Red Seal could provide them those additional hours to becoming certified carpenters.”

Student Curtis Dick has always wanted to be a carpenter, ever since he was a kid. He said the course allowed him to relearn his math and essential skills and build a shed from the ground up.

“I plan to move forward with my carpentry,” Dick said, who is from Ahousaht.

He added that he enjoyed gaining knowledge from the instructors and getting to know his classmates.

“I learnt a lot of important skills,” Mattersdorfer said. “I look forward to the next course and hope it is just as great as this last one.”

Mattersdorfer added that having a smaller class allowed for more one-on-one time with instructors which he found helpful.

Camosun College is currently in community at Ty-Histanis getting ready to deliver a second level one course for students who took part in a six-week NIC program back in 2016 building energy efficient shipping container homes for the Tla-o-qui-aht First Nation.

“This nine-week program is going to be rolling out March 11 to May 10, which will be a shorter delivery of the same level one apprenticeship training,” MacFadgen said. “After that completes in community, we should have enough students interested and prepared to take part in a level two.” 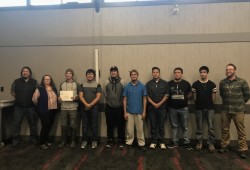 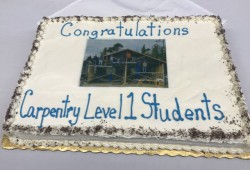