Construction to the heavily used main dock is one of several large-scale infrastructure developments underway in Ahousaht. (Submitted photos)

Several major projects are underway in Ahousaht that will not only improve the lives of the people living there, but also provide at least temporary employment for dozens of residents.

Elected Chief Greg Louie said some much needed structural repairs are being made on the main dock in Ahousaht. Formerly a federal dock maintained by the government, the structure was given to Ahousaht, leaving the nation on the hook for maintenance and repair.

Louie said structural engineers were brought in to assess the condition of the wharf. Archive photos suggest that the dock is about 100 years old. It has been repaired and altered in places but, for the most part, the long, single-lane structure is basically the same.

The main dock, as it is called, is heavily used. Vehicles regularly drive the single-lane wooden planked structure to meet incoming boats. With no space to turn around, they are forced to drive in reverse to get back to land.

Beneath the wharf are sets of floating docks where community boats are moored. In a village of about 1,000 people that is accessible only by boat or float plane, the wharf and floating docks are an important piece of infrastructure to the community.

Chief Louie sent photos showing that decking has been removed from the wharf while workers repair pilings and bracings. He said there will be a small structural change; a widening area of about four by 10 feet that will allow vehicles and pedestrians to move out of the way of oncoming traffic.

“There was a structural analysis and there are some parts that will have to be replaced, and the railings and walkways will be repaired,” said Louie.

Three or four Ahousaht men are working on the project.

“The work is being done in phases,” said Louie, adding that Ahousaht First Nation has already installed lighting and electrical outlets on the floats and wharf.

The project is expected to cost about $500,000, which will be shouldered by the band. But Louie says his council and administration are working on a partnership with Small Craft Harbours that will enable Ahousaht to start up their own harbour authority.

For now, use of Ahousaht’s docking infrastructure is free to members but, once the harbour authority is in place and a harbour master hired, users will be expected to pay fees to help pay the cost of maintenance and repair.

“We’ve sent a couple people out to investigate what it takes to be a harbour master,” said Louie.

When the time comes, Ahousaht will hire one or two people for the harbour master job. They will be sent out for training.

“When the moorage fees are in place the income will be used to pay the harbour master wages and cover maintenance costs of the wharf, then it will be self-sustaining,” said Louie.

Another project on the go is the expansion of Ahousaht’s transfer station. The transfer station, where Ahousaht’s trash and recyclables are processed, provides two full-time jobs. But a $900,000 upgrade will allow the nation to expand their repertoire of recyclables; meaning less waste being barged out of the village (destined for a landfill) and more jobs in the community.

In what Chief Louie calls Ahousaht’s industrial area, the current transfer station has had extensive road upgrades. In addition, nine docking stations for large bins are being constructed.

Louie says the village is on a schedule for trash and recyclables pick-up. There’s a day for regular garbage, another for recyclables like paper and plastic and another for compostable materials.

The trash and recyclables are sorted at the transfer station then barged out to Tofino. Ahousaht works with SonBird Refuse and Recycling out of Ucluelet to recycle plastic, paper and metal.

Louie hopes that Ahousaht will be able to add glass to the list of recyclables.

One of the difficulties with recycling is that the materials must be sorted and cleaned before it is transported out of Ahousaht. This may require the need to hire more workers for the newly expanded transfer station.

Coming soon for Ahousaht is a $21 million wastewater project, expected to begin later this spring.

“The tender closes end of February and we expect to select a contractor in March,” said Louie.

The wastewater facility will be also be located in Ahousaht’s industrial area near the transfer station and water treatment plant. Labourers from the community will be hired for the two-year project.

Always in need of more family homes, Ahousaht will soon begin construction on two six-plexes, four CMHC single-family homes and a safe home. The new construction projects will cost about $3.5 million in total and will employ workers from the village.

Louie says the six-plex will be owned by the nation for rental to families needing housing. The single-family homes will be privately owned by people that are eligible for mortgages.

The safe home, said Louie, is similar to a women’s transition house, where women can have a safe place to escape abuse – but it will be open to men as well. More importantly, it will be a neutral place to house children from the village that need a safe place.

“It could be for children entering the foster care system; where they can stay until things are sorted out with the adults,” Louie explained. 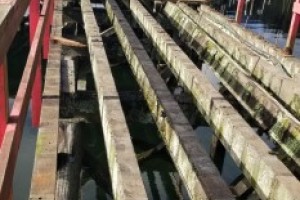 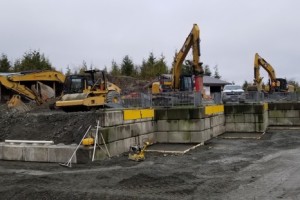 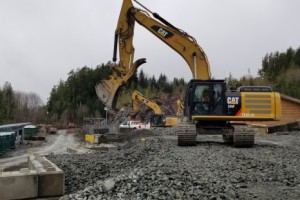