Contracts have been tendered for the next stage of constructing a 25-kilometre multi-use pathway in Pacific Rim National Park.

Parks Canada and project partners, Tla-o-qui-aht and Yuułuʔiłʔatḥ First Nations, have put out the word for contractors, posting invitations to tender on the Canadian government’s electronic tendering service, buyandsell.gc.ca.

“My understanding is that the tender for the trail bed construction is basically out as well as the environmental monitoring tender,” said Tammy Dorward, Tla-o-qui-aht project co-ordinator.

With prime construction season just around the corner, Parks Canada hosts a series of public information sessions next week to provide updates on the five-year, $51-million project. The project team will be on hand to answer questions in Ty Histanis and Tofino on March 5, Ucluelet on March 6 and Hitacu on March 7 (times and locations listed at bottom).

Named ʔapsčiik t̓ašii (pronounced ups-cheek ta-shee) — which means “going in the right direction on the trail” — the route lies in the traditional territories of Tla-o-qui-aht First Nations and Yuułuʔiłʔatḥ. Once completed, the pathway will provide safe transportation for pedestrians and cyclists from the southern to the northern boundary of the Long Beach Unit of Pacific Rim National Park Reserve. The path parallels the existing park access road.

This is no ordinary trail work, though. Parks Canada has set high standards of planning and preparation to ensure the pathway project meets environmental standards and considers the cultural significance of the coastal forest in the hahoulthees, the traditional territories.

Since the project began two years ago, work has included grubbing and excavating along with installation of bridges and culverts. Starting in April, work proceeds on the foundation for the trail. Much of the work to date has been behind the scenes though, including archeological, traditional use, geotechnical, wildlife and arbour studies that helped to determine the design.

There continues to be extensive consultation with and direction from a committee of elders. Environmental and archeological monitoring are integral to the whole process.

“Throughout the trail clearing and construction, we had environmental monitors to oversee the work,” said Jackie Hicks, project manager. When weather conditions in the park deteriorated, they would reschedule or redirect progress in order to avoid or minimize impacts.

“We’ve taken the time to construct the right pathway for everyone,” she added. “Pacific Rim contains some of the wettest places in B.C. We don’t want to cause any damage in the national park.”

Due to the extent of preparations, an extra $17 million was added to the budget last fall. Along with the extra funding came an extension in the project to March 2022.

“We expect construction to last for the next three seasons,” Hicks said, noting that the work is generally concentrated between spring and fall.

They don’t yet know whether First Nation contractors will enter bids on the latest work, but there are built-in assurances of Indigenous participation involving training, employment and subcontracting.

“They do have an Indigenous benefits package attached to it,” Dorward said. “Any general contractor is required to work with First Nations. The entire project has been a partnership with both from the beginning.” 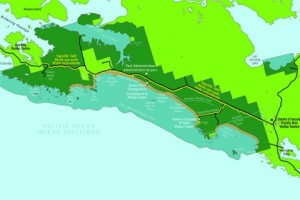