Early in the morning on March 20 John Rampanen, two of his sons and his nephew began preparing a pre-dug pit to demonstrate a traditional method of cooking food a the Secluded Wellness Centre near Port Alberni. (Denise Titian photos)

Prior to contact Nuu-chah-nulth-aht ate a simple diet of wild foods that were prepared in a variety of ways, including boiling and steaming. In the absence of metal, they developed ingenious ways to prepare food with the materials at hand.

One of those methods is called pit cooking. Great for preparing hot food for large crowds, the pit cook method takes time to prepare but the end product is delicious, steamed meats, vegetables or seafood.

John Rampanen and his family demonstrated the pit cooking method to a group of young people at the Secluded Wellness Centre on the Tseshaht reserve on March 20, as part of the Gathering Our Voices event for First Nations youth from across B.C.

John’s wife, Nitanis Desjarlais, told Ha-Shilth-Sa that preparations began days before as her family collected materials needed for the pit cook. The previous night they gathered ferns and salal branches that would be used in the pit.

Early in the following morning Rampanen, with help from two of his sons and his nephew, began preparing the pre-dug pit. In the last few days of winter, a light coating of frost covered everything, so the Rampanens were pleased when they got the fire going inside the rock-lined pit.

There were two holes, side-by-side, about three feet deep. The young men had already lined the bottom of one pit with rocks about the size of small bowling balls. From there they started a fire that was made large enough to cover all of the rocks in the pit with hot embers.

Rampanen said that the fire would be fed and kept going for at least two hours to heat the rocks thoroughly.

“The rocks won’t get any hotter after two hours but you can keep the fire going as long as you want,” he said.

After two hours the burning embers were removed from the pit before layers of salal and fern were quickly placed over the hot rocks. A small burlap envelope containing root vegetables was put over the leaves followed by another layer of leaves and about half a litre of fresh water.

Rampanen said the layering process must be done quickly to avoid too much heat loss in the rocks. The final layer is sand or soil that was excavated from the pit.

The family had prepared the day before by gathering sword fern fronds and salal branches for the pit. They would have also gathered skunk cabbage, but it is too early in the season for these leaves.

“Sometimes food can be wrapped in skunk cabbage leaves; it leaves a little sourness but it’s not bad,” said Rampanen.

Finally, after about 90 minutes of cook time, three young men began excavating the pit using shovels. When they reached the burlap sack, it took four people, one on each corner, to pull up the sack and its contents to the side of the pit.

Singed a little on the edges, the burlap sack is opened to reveal steaming potatoes, onions, garlic and beets. Everything was tossed in whole, with peelings. It is far easier to keep the food free of soil and sand when the onion or garlic skin is removed later.

Desjarlais sat at the edge of the pit cleaning the food of sand and debris before placing them in bowls. The youth gathered around, helping themselves to the steamed vegetables – a hot, healthy treat that began cooking on a bone-chilling morning. 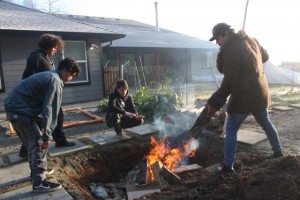 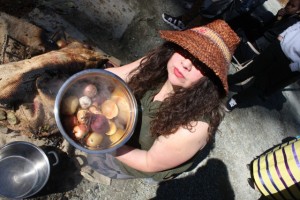 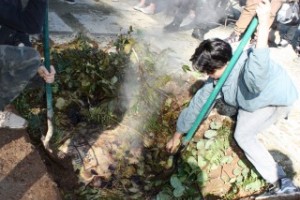