On March 18 members of the Warrior program made a small log cabin as training for four projects planned this summer. (Eric Plummer photos)

A chorus of chainsaws filled the maintenance yard of Ty-Histanis on the spring morning of March 18. With the sawdust flying around them in the cool air, a group of teenage boys diligently work over a small log cabin, marking where the joints should fit with carpentry pencils.

The boys are from three chapters of the Warrior program, an initiative designed to foster leadership in young First Nations men. The lads cut through the logs under the direction of Edwin “Buckshot” Bikadi, a seasoned log cabin builder who travelled from his home with the Lil’wat Nation in B.C.’s interior to teach chainsaw operating.

“My hands always cramp up, but it’s good to learn,” said the Ucluelet Secondary School student. “It’s nice to get out of a classroom setting and work hands on.”

With over three Nuu-chah-nulth nations regularly engaging over 40 young men in Warrior programs, the initiative has grown over the last four years since it began as the Hitacu Warriors with the Yuułuʔiłʔatḥ First Nation. At times in its early days participation was sparse, recalls Walton, who continued to attend with the program’s guide, Ricardo Manmohan.

“Me and Evan Touchie, for about a year and a half there we were just going out with Ricardo by ourselves,” he said.

“I was inside too often and I got attached to things like TVs and stuff,” continued Walton, who credits his mother, Debbie Mundy, for encouraging him to continue with the program. “She just wanted me to not be so lazy at home and to learn things too. I didn’t know how to set up a tent before I came here.”

In recent years the teenager has gained regular exposure to outdoor survival skills, like fire-building, fishing and archery. This summer the Warrior program plans to build four cabins in Nuu-chah-nulth territory as part of a partnership with North Island College at locations in Effingham Inlet, the mouth of the Megin River, Nitinaht Lake and Indian Island near Tofino. Participants can earn high school credits through the leadership training.

“This program is to teach them how to provide, protect and prepare,” Explained Manmohan. “Men don’t want to sit around; we want to do things.”

In September 2018 two chapters were added to the Yuułuʔiłʔatḥ Warriors with programs for Ahousaht and Tla-o-qui-aht youth. In Ahousaht the group meets one evening a week, plus a weekend each month of camping at a remote location, including during winter.

“Our group will create a safe space for these young men to form their self-identity, express emotion and gather perspectives from trusted connections both physical and spiritual,” reads the Ahousaht Way Warrior Program’s description. “As warriors, men are the protectors of women, children and each other. The task of a warrior is to stand up and act against violence and lead as healthy role models within the community.”

Thomas Paul, one of the program’s organizers, said the Ahousaht Warrior chapter was started to break the cyclical effect of colonisation that has damaged families’ traditional values.

“That was all taken away. So now we’re mentoring them to be self-disciplined, to be respectful, to be helpful,” he said. “That’s so important because even in my short life I’ve seen such a change in Ahousaht where we don’t even help an elder bring their groceries up from the dock anymore.”

Paul noted the importance of looking back at the resilience of Nuu-chah-nulth peoples when they lived without the conveniences and distractions of modern life.

“When I think of the ancestors, how strong their mind was, the rituals they had to do,” he said, adding that these qualities are being taught to the young men. “If we don’t nurture and teach them a good way, they’ll slip through the cracks and just do the same thing their parents did.”

The Warriors begin their cabin building projects in late June with a structure planned for the Megin River, located north of Flores Island on Vancouver Island. To provide shelter in remote locations for elders and youth, this activity is scheduled to continue into October with the project on Indian Island in Tla-o-qui-aht territory. 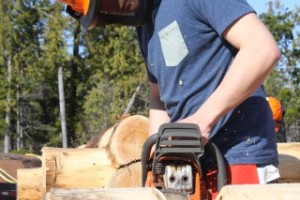 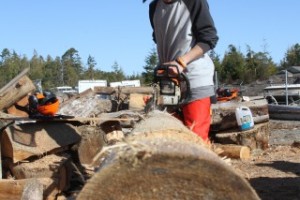 James Walton has participated in the Warrior program since its early days four years ago.