The Ditidaht village at the head of Nitinat Lake is one of several remote First Nations communities to benefit from proceeds of police seizures. (Ditidaht First Nation Facebook)

Proceeds from criminal activities will be plowed into crime remediation and prevention in several Nuu-chah-nulth communities.

Three grants to social programs based in Ditidaht, Tseshaht and Ucluelet, totalling $78,000, were announced recently through the provincial Civil Forfeiture Remediation program, welcome news for the applicants.

The grants are among 170 allocated provincewide to Indigenous groups, community not-for-profits and school districts, all funds directed at crime prevention and remediation.

“Taking the proceeds of crime and putting them back into our communities to help prevent further crime is just one way to help make our neighbourhoods safer,” said Mike Farnworth, minister of Public Safety and Solicitor General. “Many of these organizations are working with our most vulnerable citizens, helping them to rebuild and heal after years of violence, or working to prevent youth from engaging in a life of crime.”

A grant of $28,000 goes to Ditidaht First Nation’s Bridging the Gap: Counselling for Success, which offers support and counselling to women and girls who have experienced domestic violence.

Sonny Cooper, community services manager with Ditidaht First Nation, was buoyed by news of the grant. She was grateful to Sgt. Stu Forster of Lake Cowichan RCMP, for alerting her to the opportunity and assisting with an application.

In part, the funds provide for the services of a professional counsellor, Lila Harman, who travels to Ditidaht for six weeks a year to provide individual and family counselling. The program also co-ordinates foster homes and a safe house in the remote community.

With the program just getting off the ground, Cooper said they plan to celebrate the occasion with a weekend gathering in early June for girls and women of all ages at Cheewaht, located down Nitinat Lake.

“I think it’s going to be wonderful,” she said. “It’s kind of a magical place.”

A system of criminal justice centred around rehabilitation of offenders through reconciliation with victims and communities, restorative justice offers an alternative to conventional forms through the courts. Peacemaking circles are another alternative approach that can be used in more complex criminal cases, Morrison said.

“It’s starting to be used more,” he said. “It’s hard to change people’s perceptions of a better way to do things. It takes time.”

The alternative forms of justice can serve a variety of circumstances, not just crime, he said.

Morrison generally has no problem filling seats; the training is usually over-subscribed. In the past, training costs were covered by the RCMP, but training grew more expensive for participants when the RCMP withdrew from that service.

“This is great. This won’t cost participants anything, but they do need to sign up for the whole course,” said Morrison.

Training is provided through five-day courses in each community. Morrison said he will be placing ads in local newspapers to let communities know in advance.

This is a year-long program that will use a traditional Nuu-chah-nulth medicine wheel as a framework to address sexual and family violence. Through teachings provided by elders, the program is designed to reconnect young Tseshaht men with the land, traditional skills, cultural practices and language. Strengthened cultural ties provide a path to healthy relationships long term in family and community life.

Part of the strategy behind the civil forfeiture program is to undermine the profit motive behind criminal activity by taking away tools and proceeds of crime and putting them back into programs that support community crime prevention and safety. 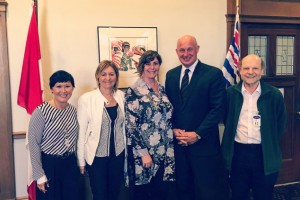 Myles Morrison (far right) meets at the provincial legislature with Minister of Public Safety and Solicitor General Mike Farnworth and others on the subject of restorative justice.