A totem pole is raised in Tofino last winter, the site where months later Lise Beare, B.C.’s minister of Tourism, Arts and Culture would announce new funding for Tofino and Ucluelet on April 24. (Melodie Charlie photo)

A recent funding announcement from the provincial government is not expected to make life any cheaper for those living on the west coast.

But Bob MacPherson, the chief administrative officer for the District of Tofino, believes residents should be welcoming news the B.C. government is increasing its funding to the Resort Municipality Initiative (RMI) program.

“Does this program directly impact residents?” MacPherson said. “No. But it does indirectly impact them. That’s because their property taxes are not being collected for these projects.”

As a result, those communities who will see new infrastructure projects take place will be able to enjoy them without being asked to pump their own money in.

The RMI program was established a dozen years ago. Since then the provincial government has provided funding to 14 districts, including Tofino and Ucluelet, which provide services to nearby Nuu-chah-nulth nations, including Yuułuʔiłʔatḥ, Toquaht, Ahousaht and Tla-o-qui-aht First Nations.

The annual funding has supported long-term planning and investments for tourism infrastructure projects.

Ucluelet’s mayor Mayco Noel is pleased the provincial government continues to provide funding to his district and other resort communities.

“The RMI program continues to grow and strengthen each year,” he said. “The funding allows the district to plan and create more community assets. It’s a wonderful program and all residents benefit from the outcomes of the projects.”

All districts are expected to utilize their funding to improve their existing or invest in new community tourism assets and programming.

MacPherson is rather pleased Tofino will get close to $1.2 million in funding this year. That’s almost double the $600,000 the district received from the province two years ago.

“There has been a funding formula in place the last dozen years,” MacPherson said. “But it had been capped provincially in 2015.”

Under the RMI funding formula, MacPherson said Tofino received $900,000 last year. To have this figure increase by almost $300,000 this year was welcome news.

“It’s based on the amount of hotel tax collected from each community,” MacPherson added of the provincial funding formula.

He said Tofino officials were not caught off guard by how much additional funding they will be receiving this year.

“It wasn’t a shock,” said MacPherson, who has been Tofino’s CAO for the past six years. “We’ve been working with the province. We had been discussing what an equitable program would look like.”

MacPherson said it has yet to be fully determined how Tofino officials will spend the new funding they are getting.

“We’re still working on that,” he said. “We don’t know where every dollar will go.”

A priority in recent years, however, has been Tofino’s downtown revitalization. This includes the widening of Tofino’s sidewalks as well as increased planting to beautify the community.

Funding will also enable Tofino officials to operate a free seasonal shuttle service. This service will be throughout the months of July and August, when the community sees the greatest number of visitors.

MacPherson said this shuttle service helps alleviate some parking concerns for not only visitors but also area residents.

“The shuttle service will run seven days a week, from 8 a.m. until late evening,” MacPherson said.

Funding will also help Tofino officials do some improvement work on a six-kilometre, multi-use trail that runs the length of the community.

“It is currently paved,” MacPherson said of the path. “But some sections were built 20 years ago. They are narrower than our current demand will support. And they are getting beat up.”
For other communities RMI funding will enable various projects, including public washrooms, emergency kiosks, public art, special events and festival support. 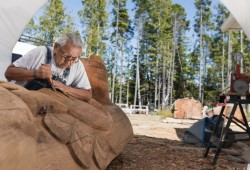 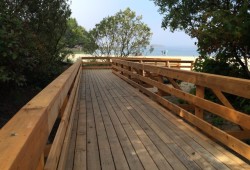