Carolyn Lee poses with her sister Brenda. The mysery and eventual solving of her murder in 1977 is part of the Bulldog and the Helix, a true-crime book scheduled to be presented by its author, Shayne Morrow, at the Echo Centre on Thursday. (Alberni Valley Museum photo)

The Bulldog and the Helix is Shayne Morrow’s newly published book chronicling the quest to catch two killers and how the rapidly evolving science of DNA put two criminals behind bars.

Long-time residents of Port Alberni know the story of Carolyn Lee, the 12-year-old girl that disappeared April 14, 1977 on her way from her dance class to her parent’s restaurant just over three blocks away. Her body was found the following day, about four kilometres away at what was then known as Port Potato, at the edge of Cox Lake. Locals simply called it the potato farm.

Investigators were fortunate that the diligent property owner heeded advice broadcasted on the local radio asking people to search their properties for the missing girl.

When he came up on the tragic crime scene, Lyle Price had the clarity of mind to not contaminate the scene and backed away, retracing his steps in the thin layer of snow back to his dirt bike.  There were still clear tire tracks and clothing scattered about that could be forensically tested. But back then, DNA was unheard of.

Just over 19 years later another Port Alberni girl was playing at the ball park, within view of the family home. On July 31, 11-year-old Jessica States, described by some as a fun-loving, spirited tom boy offered to catch fly balls for $1 each during a men’s fast pitch tournament.

The area was buzzing with activity that warm summer night, with the ball tournament going on at the stadium and, just down the hill at Dry Creek Park, also known as the gulley, campers from Ahousaht were settling down for the night after taking part in the summer’s NTC Tlu-piich Games.

Jessica hadn’t returned home shortly after 9 p.m., so her parents went out to search. When they couldn’t find her they reported their daughter missing to the RCMP at about 11 p.m.

Sadly, the following day, searchers found her lifeless body concealed under tree bark and forest debris, just down the embankment next to the ball park.

Reporter Shayne Morrow had been working for the Alberni Valley Times that summer and worked extensively with the local RCMP detachment. Through his work at the paper and with the police officers, he gathered insights and details to two of the city’s worst crimes, and how the emerging and rapidly evolving science of DNA clinched both cases.

With his master’s degree in creative writing, Morrow certainly has the ability to write a book. It took his fascination with the science of DNA to plant the creative seeds for a book.

Morrow grew up in Vancouver B.C., moving his family to Port Alberni in 1994. He landed a job at AV Times in February 1996 where he began working on local crime stories.

“I did work experience and had to go to Vancouver where I toured the forensics lab and met the DNA manager – it was fantastic! I was hooked!” Morrow told Ha-Shilth-Sa.

He developed close working relationships with local police investigators, maintaining those connections over the decades even after many of them moved on or retired.

Through these connections he is able to weave an engaging account of life in Port Alberni and how two horrific crimes gripped the city.

Early on in the book you will hear how a Nuu-chah-nulth woman helped the investigators hone in on the prime suspect after she recognized the blue Chevy Blazer that she had been sexually assaulted in. Through this identification investigators were able to match tire impressions from the suspect’s vehicle to those at the crime scene.

Fifteen years later another Nuu-chah-nulth woman reported a sexual assault, allegedly by the same suspect. The victim reported to the police that “in the course of assaulting her, threatened her by telling her he had killed Carolyn Lee.”

While the sexual assault cases against Gurmit Singh Dhillon were dismissed, the stories of both victims were factors in identifying him as a lead suspect in the murder of Carolyn Lee.

Morrow says one case was solved forward with DNA technology and the other going backward. Investigators had a strong suspect in the Lee case but they needed irrefutable proof to convict him.

By the time DNA science was emerging, the DNA samples in the Lee case were degraded. In addition, scientists needed to build a DNA profile for Carolyn by collecting amples from her parents. It wasn’t until better, more sensitive DNA testing techniques came available that, 20 years later, Dhillon was positively identified as the assailant.

In the States case, they had the technology to get their irrefutable DNA proof but had no clear suspect. They had a mountain of testing to do, given all the people that were in the area the night Jessica died.

Fortunately, most of the men that were there were willing to provide DNA samples to exonerate themselves and to assist the investigation, including the men at the ball tournament and the Ahousaht campers in Dry Creek Park.

Morrow said that investigators made a trip to Ahousaht to collect DNA samples and everyone they spoke to was willing to submit.

More than 800 DNA samples were collected and each had to go through testing, small batches at a time. Scientists finally had a hit, three years later. Roderick Patten was a troubled 17-year-old that had been hanging out at the park boulevard the night Jessica was murdered. He eventually gave a detailed confession to a Port Alberni investigator.

Morrow takes his readers through the events that led up to the convictions of Dhillon and Patten, artfully weaving in other crimes and events that happened during the investigations and trials.

“The States case was a landmark in that it was the first successful DNA blooding in Canadian History,” said Hiron Poon, DNA expert. Blooding is an investigative technique where law enforcement collects a large number of voluntary DNA samples from the public.

Morrow says that while the tragedies he wrote about were unfortunate, the experience of writing the book was extremely fulfilling.

The Bulldog and the Helix by Shayne Morrow was published in 2019 and is available for purchase at the Alberni Valley Museum for $22.95.

Morrow will host a reading and reception, complete with a spiritual cleansing ceremony performed by members of Nuu-chah-nulth Tribal Council’s Teechuktl Mental Health staff. The reading takes place May 23 at the Dogwood room at Echo Centre starting at 7 p.m. 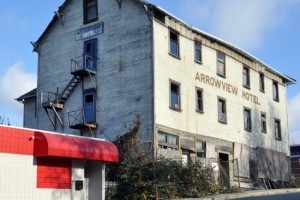 The Pat Cummings School of Dance, which was located next to the Arrowview Hotel, was where Carolyn Lee left to walk to her parents' nearby restaurant. (Shayne Morrow photo) 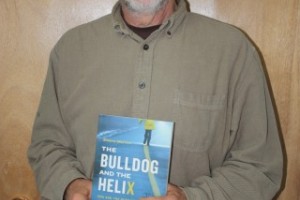 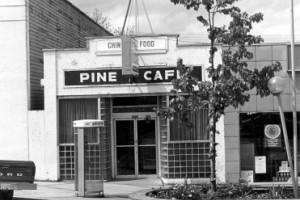