Natalie Jack, pictured, and her son Henry Jack Jr.. were honoured with a double potlatch in Kyuquot on May 18, two years after their passing. (Submitted photos)

It has been two years since the tragic passing of two of Kyuquot’s beloved community members, siblings Natalie Jack and her younger brother Paul Vincent Sr.

The pair both battled cancer. According to co-host Allison Vincent, her father and aunt were known to be stubborn and waited on getting medical advice for the ongoing illness.

“By the time my aunt got checked, she was in stage four cancer,” said Allison.

Both siblings were in the hospital in Campbell River over the 2016 holiday season, but on different floors. Unable to visit one another, they communicated via iPads.

In January 2017 Natalie was transferred to a hospital in Victoria, B.C. The following day her brother Paul passed away in Campbell River; literally minutes later Natalie died

“Natalie was the heart of Kyuquot,” said Allison. “She, along with Janice John-Smith created the student school potlatch for the north island SD84.”

Natalie was involved in all community events and could be found in the kitchen, organizing other volunteers or taking part in cultural activities. Her door was always open to visitors.

In 2005, Natalie’s father, Ha’wilth John Vincent, died before he could name his heir to the seat. Natalie, being the eldest daughter, held her father’ seat until an heir could take it.

“She was planning right up to the end,” said Allison. Before she passed, Natalie gave instructions stating that she wanted Archie Vincent to be seated before the month of May.

Allison said the year she lost her father and aunt was hard for the community. The families grieved together and planned to host joint memorial potlatch for the siblings but more tragedy followed, forcing a change in plans.

“We were going to do the memorials together but with Henry’s passing, the other family was just not ready to go ahead with a memorial so we had to split the potlatches,” said Allison.

Allison and her cousin Cynthia Blackstone invited loved ones back to Kyuquot to dry their tears and remember Natalie and Henry. The potlatch was held in Kyuquot on May 18.

It was the first potlatch hosted by a seated Vincent Ha’wilth in several years, Allison said. The Vincent family said Archie was seated on March 16, 2019.

Archie Vincent, whose traditional name happens to be Ha'wilth, and his Hakuum Tsa wii tsupt (Virginia Vincent) were the official hosts of the double memorial potlatch.

The potlatch was a success and Allison reported that at one point the Vincent family stood to address the crowd.

“They stressed how important it is to get your health checked,” said Allison.

For the Vincents, it is important that people play close attention to what their bodies are telling them and to stay on top of things. 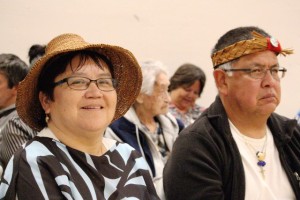 Tsa wii tsupt (Virginia Vincent) and Ha'wilth (Archie Vincent) were the official hosts for the potlatch. 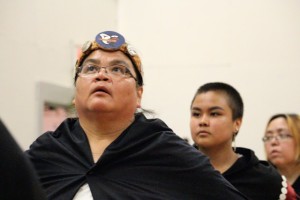 Janice John-Smith and Natalia Bell participate in the potlatch in Kyuquot.