True value of national inquiry is recognizing those who the justice system left behind, say families of victims

Carol Frank speaks with family on behalf of Lisa Marie Young, who went missing from Nanaimo in 2002, at a gathering in Port Alberni on June 5. (Denise Titian photos)

Dozens of red dresses hung over a gathering last week in Port Alberni, as families shared the stories of loved ones they lost to homicide. Silently swaying from the Italian Hall’s ceiling, the 23 vibrant garments hung above the event as a reminder of the lives that were taken away.

The Tseshaht First Nation hosted the gathering on June 5 and 6 with the help of the NTC’s Teechuktl Mental Health, as the country digested the findings from the National Inquiry into Missing and Murdered Indigenous Women and Girls that was released days earlier. When it was published and handed over to the federal government on June 3, the national inquiry pointed to “persistent and deliberate human and Indigenous rights violations” that led to the prevalence of Aboriginal women who were killed in Canada over the last few generations. The inquiry’s report used the term “genocide” to describe the factors that caused Indigenous women to be murdered at four times the national average.

Shockwaves through a family

Since the 1960s at least 40 Nuu-chah-nulth women have gone missing or died under suspicious circumstances, according to Teechuktl staff working closely with the victims’ families. For sisters Cynthia Keitlah and Rowena Cootes a tragedy sent shockwaves through their family when three-year-old Holly Marshall was found raped and murdered after an all-night party in Port Alberni on July 19, 1987.

“We can’t talk about it – it hurts so much,” said Cynthia Keitlah, Holly’s aunt, during the recent gathering. “You have no control over it but it controls you. You want to be happy but you’re angry all the time.”

Originally charged with first-degree murder, the spouse of Holly’s mother was convicted of manslaughter with an eight-year sentence for the toddler’s death.

Holly’s mother, Nadine Marshall, lived with the pain of her daughter’s murder for several years.

“She was homeless, angry and didn’t want our pity, she called it,” said Keitlah of her sister.

Twenty-five years after her daughter’s murder, Marshall was found dead behind a dumpster in Esquimalt, B.C. After her body was located by the Archie Browning Sports Centre, the Victoria Police Department identified the death as suspicious, noting that it was evident Marshall didn’t die from natural causes. But since then little information has been provided to the family.

“Her case is closed and cold,” said Keitlah, adding that she had feelings of guilt because she wanted to be there for her sister, to help her through her agony, her pain.

Although her sister “did live a life of drugs,” the mystery of her death has haunted the family with unanswered questions in the years since, said Cootes.

“It falls under suspicion. What was she doing on that side of town?” she said. “When she left the house she said she was going to be right back.”

Nadine Marshall’s father was the late Nelson Keitlah, an Ahousaht leader who persistently visited the Victoria Police Department in search of answers into what happened to his daughter. But despite his stature among Nuu-chah-nulth-aht, the late Keitlah often sat ignored at the police station, recalled Rowena.

“He’d be sitting at the police station for 15, 20 minutes until somebody came to talk to him,” she said. “Our dad used to go down there all the time only to hear, ‘We can’t tell you anything. It’s an ongoing investigation.’ It’s really hard on our family. We are split.”

“How come our system is like that?” asked Cootes. “I think there’s a lot of people out there that know what happened and aren’t talking.”

The disconnect between law enforcement and the families of victims was noted in the national inquiry’s recommendations, which include a call for the federal government to set up police oversight bodies to “observe and oversee” cases of negligence affecting Indigenous people.

Stan Matthew, who lost his sister in 1978, gave a statement to the national inquiry to help inform its findings. Mary Matthew’s badly beaten body was found on Vancouver’s East Hastings Street, prompting Stan’s uncle Jack Patrick to head to the city for answers.

“He went to the police, explained to them who he was, how he was related to our sister, and just no results. So it has never been solved,” said Matthew. “There was really no follow up with family after the investigation, it was just left.”

Despite evidence presented in court linking Gilbert Paul Jordan to the deaths of a at least half a dozen women who died from alcohol poisoning, the serial killer received a 15-year sentence for manslaughter, which was later reduced to nine upon appeal. Recounting the death of her mother still makes Joanne Malinski shake with emotion, nearly 35 years after Patricia Thomas’s body was found in Vancouver with a blood-alcohol level of .51 after drinking with Jordan.

“There has to be knowledge about what’s going on, about what’s happened to her,” said Malinski. “It’s made me grow a little bit and learn to forgive her by talking and actually hearing her name, knowing that me and my sisters have to be a voice for her.”

Now it’s out in the open

Before it was launched in 2016, First Nations groups called for a national inquiry for years, but Conservative prime minister Stephen Harper contended that such a sweeping initiative would be an ineffective means of tackling the issue. Now that it’s completed, the national inquiry has run over its initial $53.8-million budget to $92 million, producing a 1,200-page report after multiple high level resignations over the last two and a half years. Some criticize the unfocused scope of the final report, which also calls for a guaranteed basic income for all Canadians and addresses injustices to 2SLGBTQQIA people, which stands for two-spirited, lesbian, gay bisexual, transgender, queer, questioning, intersex and asexual.

But the family members of Nuu-chah-nulth victims feel that the true value of the inquiry is that the stories of their loved ones were considered in a national format, years after the missing and murdered were left behind by the justice system.

Carol Frank was the single Nuu-chah-nulth delegate invited to Quebec for the handing over of the MMIWG inquiry findings to the Prime Minister. Her niece, Lisa Marie Young, disappeared 17 years ago. The 21 year-old was about to start a new job and move into a new apartment, but friends and family never saw her again after going out one night in late June 2002. Lisa Marie was last seen accepting a ride from a man she and her friends had just met that night.

The family holds a walk for Lisa Marie Young each year in Nanaimo, the next event scheduled on June 30.

“I feel it’s really important for me to keep Lisa’s name out there. She was only 21, didn’t deserve this,” Frank said.

Joanne Young worked tirelessly, despite failing health, to keep her daughter’s name in the public eye. She died of complications from kidney failure two years ago.

“I believe her mother (Joanne Young) died from her grief,” added Frank.

‘Her voice was heard’

Family members were called up to light the candles during the recent gathering in Port Alberni, one for each of the estimated 40 Nuu-chah-nulth missing or murdered women and girls. The Keitlah family thanked the organizers of the healing event. By standing up and sharing their stories, the sisters of Nadine Marshall said they hoped that they would give others the courage and strength to get through their pain

“Thank you for all you’re doing;” they said to the Teechuktl team.

“I know this is real healing,” Rowena added.

Each morning upon waking Joanne Malinski still thinks about the mother she lost at the age of 12. She recalls feeling her mother’s presence on one particular day a few years ago.

“I was walking down the street and was having just a really bad day,” said Malinski. “I stopped totally stopped in my tracks, I could hear her voice, [saying] ‘Are you okay?’.”

Matthew found himself speaking to his sister while hanging a red dress in her honour. 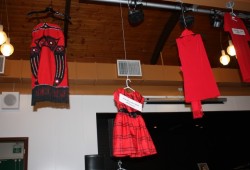 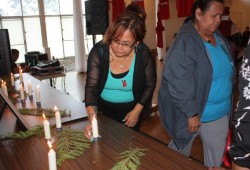 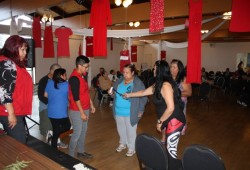 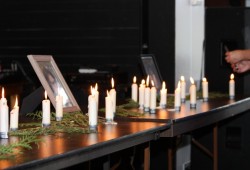