Despite being from vastly contrasting communities, youth from different parts of the country have become close friends.

For starters, 21 students and three chaperones from the school, located in the remote Nuu-chah-nulth community on northwestern Vancouver Island which is accessible only by boat or float plane, travelled to Hamilton, Ont. in early May. During the eight-day trip to Ontario, the Kyuquot contingent was hosted by representatives from St. Jean de Brebeuf Catholic Secondary School.

The exchange was completed later in May when 27 St. Jean de Brebeuf students and three chaperones came to Kyuquot for a six-day stay.

The Kyuquot/Hamilton exchange was organized and partly funded by Experiences Canada, an Ottawa-based charitable organization.

Monique Comeau, one of the Kyuquot teachers who travelled to Ontario, believes the exchange will create some long-lasting friendships. She said students from the two schools have continued their interactions online since the trips concluded.

“I know they’re pretty involved on social media,” Comeau said of the students from both schools.

This marked the third time Kyuquot students had been on an Experiences Canada exchange. Students had also travelled to Ontario the previous two times. The last exchange involving Kyoquot was during the 2014-15 school year.

Simone Randall, who teaches math and science at the Kyoquot school, was one of the adults who travelled with students to Ontario. She said big-city life was an eyeopener, especially for those Kyoquot students who had not been on a previous exchange.

“The size of their school shocked us,” Randall said. “We only have classrooms and one portable classroom.”

Randall added even the St. Jean de Brebeuf students had some new experiences when they travelled to Kyoquot.

“A lot of them had never been on a boat before,” she said.

While in Ontario, Kyoquot students also had the opportunity to travel to Toronto, the country’s most populous city located about a one-hour drive from Hamilton.

Comeau said there was another highlight for the Kyoquot students.

“They really loved Canada’s Wonderland,” she said. “To go to an amusement park for the first time was amazing.”

Comeau said just leaving their own community and also reciprocating the exchange was a big deal for some of the Kyoquot students.

“They rarely get to go elsewhere, let alone have a bunch of new faces of students come to them,” she said.

Students from the two schools also went on a geocaching venture. A joint dance was also held and Hamilton students watched those from Kyoquot perform ceremonial Nuu-chah-nulth songs and dances.

After the exchange was over, Kyuquot students wrote about their experiences.

“I love culture and I also loved how much interest they showed during and after we were done. When we finished performing all of the songs/dances I had a few of their students ask ‘Are you guys going to be doing more dancing?’.”   -  Braelene Leo, Grade 8

“Our group went up by the water tanks and hiked uphill to a cedar tree and thanked the creator and the tree for giving us the cedar, after getting the cedar we went back to the school. We need to soak cedar for one year before we can actually use it for crafts, so we used cedar that was already soaked for a year, and we made bracelets and stuff.”  – Wayne Jr. Vincent, Grade 11

“The dance could’ve been the best night of my life! It was full of excitement, sweat and amazing music. I liked that it wasn’t filled to the brim with rules (just the reasonable ones) and it was very free-flow. We got to pick the music we wanted, most of us were comfortable dancing and getting close with each other.”   - Farakina Chidley, Grade 11

“Learning about the tide pools and getting seafood was fun. They got to try some of our seafood they never tried before. Then going down by the water and throwing rocks and skipping them was fun … Dancing by the fire with everyone was great. Some songs we didn’t know but we still danced.”         -  Danica Mack, Grade 8 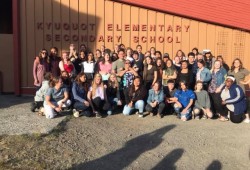 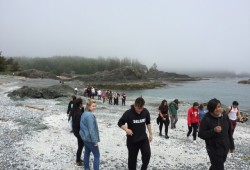 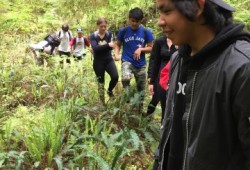 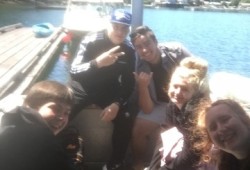 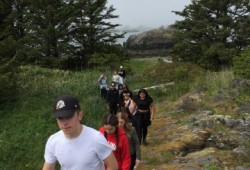