Gregory Billy Jr. is meeting his West Coast family for the first time, after connecting through a DNA sharing site. (Photos submitted by April Lucas)

An Ehattesaht First Nation man has connected with his long-lost nephew through a trail of information beginning with a DNA sharing website.

Lyle Billy’s common-law wife April Lucas has been using a DNA sharing website, MyHeritage, for years. On her profile, Lucas has Billy listed as her spouse along with his parents’ names. Through a messaging system on the website, Lucas was contacted by someone who was trying to track down family of a Gregory Vincent Billy Jr.

It turned out Billy Jr. was the son of Lyle’s brother Gregory Billy Sr. who passed away in 1992.

Through a bit of Facebook searching, Billy and Lyle were able to track down Billy Jr., who swiftly planned a trip to Vancouver Island to visit the family he’s never met before.

Billy said after his brother passed away, he believed his brother’s widow moved to Ontario with Billy Jr.

“They lived in Vancouver, and back then I was always away at logging camps…so I never really connected with them while they lived in Vancouver,” Billy said. “At the time (of Billy Sr.’s passing) the mother took Gregory (Jr.) and his siblings back to Ontario. I think that’s where she’s from.”

Billy was able to speak with Billy Jr. on the phone, which he said was quite an emotional experience.

“I let him know that if he were to come out this way we would make plans for him to meet as much of the family as we could get together,” Billy said.

Billy Jr. and his family will visit the Island from Ontario for about five or six days starting with a big family dinner in Nanaimo on July 13. Before that he will spend the night in Vancouver with Billy’s niece and her family.

“We’re wanting to get as many family members down to Nanaimo as we can. That will be the introduction of everyone to him and his family to us,” Billy said. “It’s quite exciting for everyone at this point to be able to meet him.”

Other plans during Billy Jr.’s visit may include a trip to Parksville Beach to see the sand castles.

Lucas said she highly recommends DNA sharing websites to anyone.

“I would recommend it highly because of situations like this,” Lucas said. “Five years ago I asked Lyle about his older brothers. I asked him if any of them ever had children and he mentioned Gregory (Billy Sr.) having a son and I said, ‘where is he?’ and he goes, ‘I don’t know, he must be back east.’ I think that connection is very important, not only for [Lyle] but for other family members as well.” 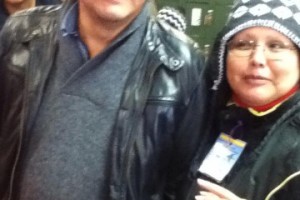